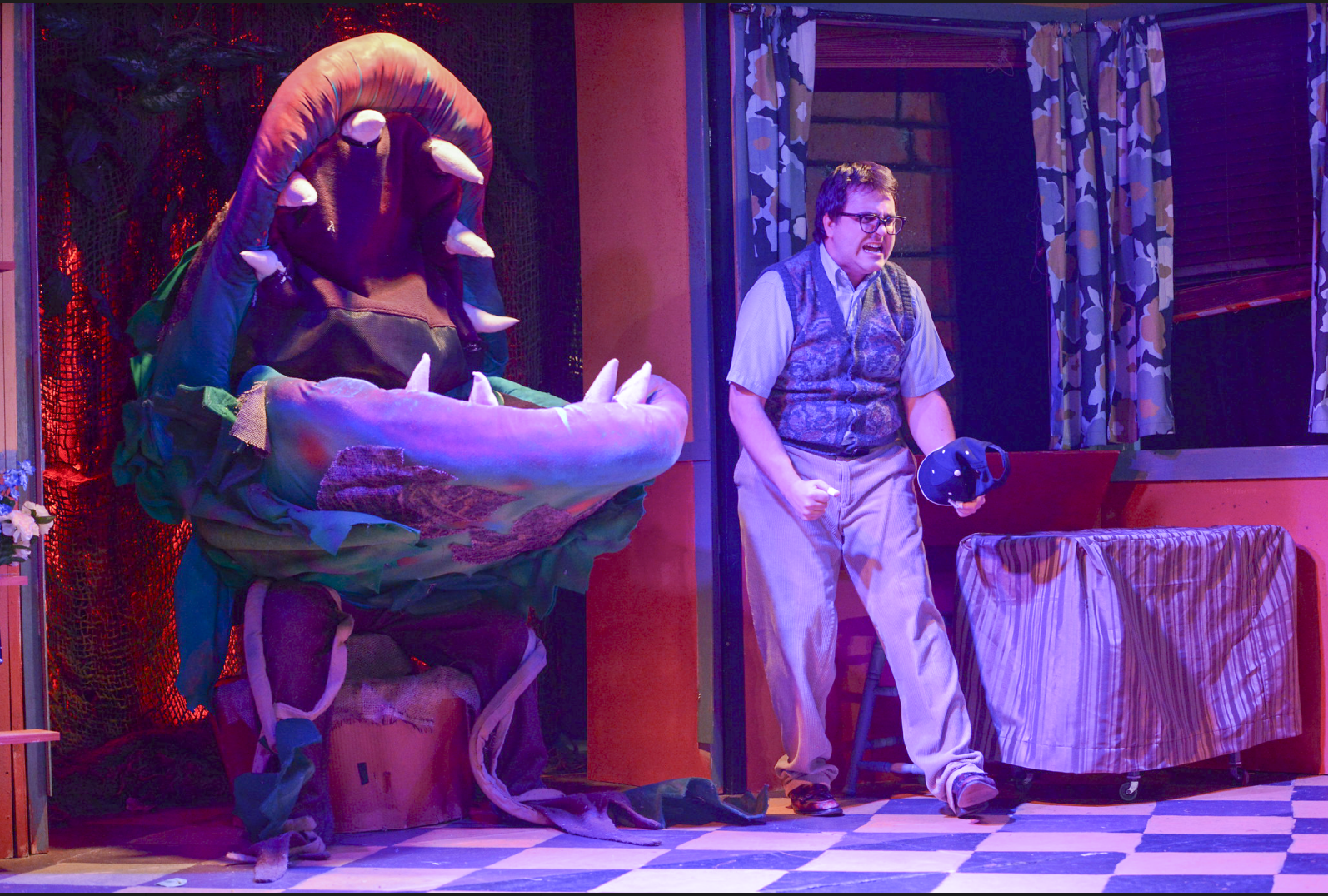 On the second floor of the Alcove, above the ornate chandeliers, gleaming cutlery and families celebrating special occasions, a musical ensemble bursts through the doors of a theater. They sing and dance around tables of people eating plates of chicken or fish, making their way up to the stage to perform Alan Menken and Howard Ashman’s classic musical Little Shop of Horrors.

Dinner theater at the Alcove, downtown Mount Vernon’s go-to classy dining spot, is a long-running tradition. Bruce Jacklin, the director of this production of Little Shop of Horrors, has been involved from the beginning, when the Mount Vernon Players performed a series of one-act plays at the Alcove one weekend in 1986. Jacklin has been the artistic director and producer for Alcove Dinner Theater since 2004. The group produces four dinner theater productions each year, ranging from over-the-top theatrical musicals like Little Shop of Horrors to more serious plays like Ernest Thompson’s drama On Golden Pond, scheduled for this upcoming April. Little Shop of Horrors opened on Oct. 25 and will run until Nov. 16.

Little Shop of Horrors follows the exploits of Seymour, played by Ian Fraser Ernsberger, an earnest but disheveled and socially inept florist working in a failing flower shop. Seymour is in love with his co-worker Audrey, played by Kelly Lauth, who is trapped in an abusive relationship with a sadistic dentist named Orin, played by Aaron Moreland.

Seymour’s life turns around when, during a solar eclipse, he discovers a bizarre plant which he dubs “Audrey II.” Audrey II vaguely resembles a watermelon—that is, if that watermelon had fangs, could sing and needed to eat people to survive. The plant’s carnivorous, murderous tendencies reveal themselves as it bribes Seymour with love, fame and fortune in exchange for human flesh. This grisly content made for a fitting Halloween production.

“It’s a show I’ve wanted to direct for a long time and we just thought, for a Halloween show, it’s perfect,” Jacklin said.

The delightful melodies of Menken and Ashman’s Motown-inspired soundtrack buoy the narrative of Seymour as he becomes further entrenched in the plant’s evil plans. Ravae Butler, Alicia Hoffman and AT Sanders take the stage as “the Urchins,” guiding the plot and charming the audience with synchronized choreography and retro harmonies like a sixties girl-group-style Greek Chorus.

The Alcove’s production was distinguished by its intimate setting and creative use of space. The stage is small and the backstage even smaller. Actors have to go through a kitchen, dodging waiters with trays of ice cream, to reach a backstage that is only a few square feet.

“Bringing [the play] down to the size that we need to to fit in that intimate space is always the beginning challenge,” Jacklin said. “But we have been doing this for 20-plus years.”

In Jacklin’s time with the Alcove’s modest stage, he has learned to embrace the room that they do have. Costumes and props are carefully organized and stacked to utilize the space the best way possible. In this production, the intimacy between the audience and performers takes a central role. Actors frequently come offstage, performing scenes in front of the stage and entering from the back of the room.

At one point, during the song “Be a Dentist,” sung to savory evil perfection by Moreland, the “Urchins” come offstage, inviting audience members to open their mouths and say “ahh.”

“People love the intimacy of the show, that you are right there close enough to see the actors,” Jacklin said.

For many in Mount Vernon, and even for those that live far away, these dinner theater performances have become a community staple, bringing together neighbors and people who live miles apart. “People sometimes sit with people they don’t even know and they begin dinner conversations,” Jacklin said. “Surprisingly enough, two-thirds of our audience come from out of town.”

Little Shop of Horrors will be bringing the community together for dinner, entertainment and laughter for another two weekends, with their final performance coming on Nov. 16.