It took 19 days for the Ohio weather to cooperate, but after multiple cancellations and postponements due to rain and snow, the baseball team was  able to get back on the field last week for the first time since spring break.

The Lords kicked things off by splitting a doubleheader at Ohio Wesleyan University on April 5. The Lords jumped out to a fast start in game one against the Battling Bishops, scoring two runs in the first inning. That lead did not last long though, as starting pitcher Will Allen ’20 gave up eight earned runs over the course of the first two and one-third innings. In the third, Rawson Scheinberg ’19 came in and let up one more run in that inning, and finished the game pitching five and two-thirds innings with five strikeouts and while only giving up five hits and one walk.

Both starting pitchers were locked in for the first eight innings in the second game. For the Lords, Pat Craig ’21 threw six and two-third innings, and did not give up a hit until the fourth and a run until the Battling Bishops scored two unearned runs in the sixth. Craig finished the day giving up seven hits, one walk and six strikeouts. The Lords, down 3-1 entering the eighth inning, got the comeback started on a solo homerun from Matt von Roemer ’18. A smattering of base hits and mistakes by Ohio Wesleyan helped the Lords score five more runs in the ninth. Entering the bottom on the ninth leading 7-3, the Battling Bishops made it close, scoring three runs to make the score 7-6, but the Lords hung on to secure the doubleheader split.

Overnight snow on Friday pushed the Lords to cancel their games against the University of Mount Union on Sunday  to play two against Wabash during the weekend. The Lords kept game one against Wabash close through four innings as Kenyon starter Nathan Chandler ’20 held the Little Giants to only one run on two hits in those four innings. Bryan Roberts of Wabash pitched into the eighth and held the Lords to just five hits and one run on an RBI single from von Roemer in the eighth. After one run in the third, the Little Giants scored three runs in both the fifth and sixth and then tacked on five more in the eighth to beat the Lords 12-1. 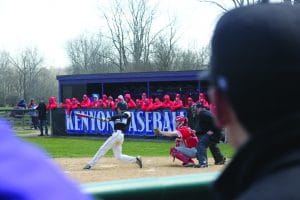 On Sunday, Alex Gow ’21 kept the Little Giants’ bats in check through five innings, giving up two runs on six hits, a walk and three hit batters. Jesse Bogacz ’18 came in to relieve Gow, pitching four strong innings to finish the game. In his strong outing, Bogacz walked two, struck out seven and let up an unearned run. Despite leading off a few innings with hits and generally making strong contact, the Lords struggled to get their offense going. Senior starter for the Little Giants, Cody Cochran, held the Lords to just four hits over seven innings of work.

The Lords made up game one of a previously postponed doubleheader against Hiram on Wednesday. They got off to a fast start, plating eight runs in the first four innings, with three of those runs coming on a three-run homerun from Matt Contreras ’19. However, the Terriers scored eight runs in the sixth inning to tie the game. The Lords and the Terriers each scored one run in the seventh and two runs in the eighth to enter the ninth tied 11-11. After a scoreless ninth inning the Lords were able to score two runs on an error by the Terrier’s shortstop. That two-run lead was enough for Will Oakley ’20, who closed the game for the Lords.

Due to the length of the first game, the Lords had to postpone game two of their doubleheader. The Lords are scheduled to play a doubleheader against Depauw University on Saturday in Greencastle, Ind.