The Ladies tennis team opened their spring season on Saturday against the University of Northwestern Ohio Racers. While most of the team played well to open their individual matches, the Ladies rarely closed the deal and ultimately lost the match 6-3.

Diana Aboubakare ’18 earned one of the Ladies’ three points by winning No. 1 singles in three sets against the Racers’ Amanda Schneider. Schneider, who is ranked the fifth-best singles player in the National Association of Intercollegiate Athletics, won the second set against Aboubakare, before being closed out in the third set.

Of the nine overall matches, the Ladies won the first set six times, but only ended up winning three of those matches. Mara Kaspers ’20 earned the other Ladies’ victory in singles play, winning No. 5 singles in two sets. While the Ladies dropped two of three doubles matches, the pairing of Jenna Murray ’17 and Annie Reiner ’19 prevented the team from being swept.

While some may view the Ladies’ difficulty in closing out their opponents as an issue of stamina, Grace Winslow ’18 attributed it to the strength of the Racers.

“We all came out and did really well in our first sets, but a lot of our opponents stepped it up as the matches went on,” Winslow said. “I think the more we get used to playing longer and tougher matches throughout the season, we’ll better be able to maintain our leads and sustain high intensity through an entire match.” 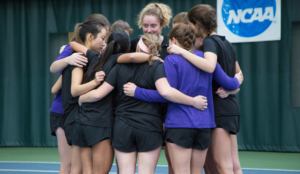 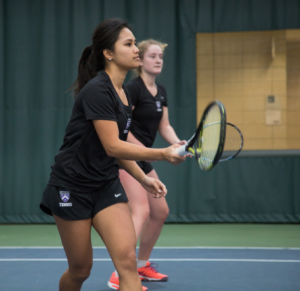 The team also has the advantage of retaining the vast majority of their players for a couple of years. Only one starter graduated last season, and the team has just one senior this season. The team has grown close as a result.

“The chemistry on our team is awesome, and I’m excited to see how we continue to grow and push each other to get better,” Aboubakare said.

The Ladies are in the midst of two weeks off to train before their next match on Feb. 10, in Holland, Mich., where they will take on Hope College.