University of Northwestern Ohio narrowly defeated Lords’ tennis in a tightly-contested competition on Jan. 28 that ended with a 5-4 score.

The home match pitted the Lords against the Racers of the University of Northwestern Ohio — a non-conference opponent ranked fifth nationally in the National Association of Intercollegiate Athletics’ (NAIA) preseason polls.

The season-opening match started off with a bang, with Weston Noall ’18 and Peter Hazlett ’18 securing the first point of the season in their 8-3 doubles win. The Racers won the remaining two doubles matches but split the singles matches three to three.

The competition highlighted impressive performances not just by Noall and Hazlett, but also by two of the team’s five newcomers. Jacob Zalenski ’20 won his match in straight sets and Austin Diehl ’20 won two sets to one, despite receiving medical attention for his hip in the second set. Despite the loss, the match was a positive one, showing the Lords they can do well against stiff competition.

“We’ve got a good team energy,” Zalenski, who scored the team’s first singles point of the season, said. “It’s definitely a lot of fun.”

“We did fight well; it was a good start to the season” Michael Liu ’18 said. Liu won his match two to one after reeling off six straight points in the third set.

The Lords are excited to be back on the tennis court and have high expectations for indoor nationals, when they will first face Washington University in St. Louis, a team that beat them last season. The team faces the loss of veteran players Sam Geier ’16 and Robert Turlington ’16, but also gained four first years and a transfer student.

“We’re a pretty young team, so we’re just going to try to do our best,” Liu said.

As for the near future, the Lords will play another home match on Sunday against the Little Giants of Wabash College.

“They’re tough,” a confident Liu said, but he added that the Lords expect to come out on top.

Kenyon will face off against Wabash on Feb. 5 at 11:30 a.m. in the Jasper Tennis Center at the KAC. 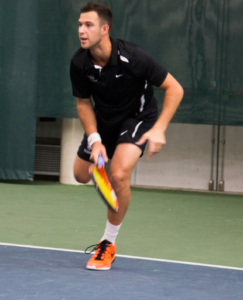 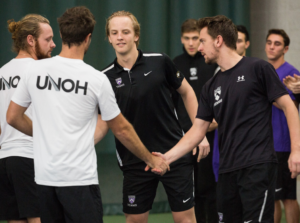