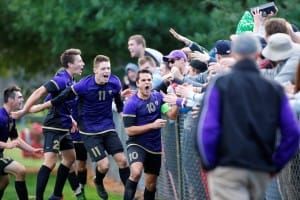 In the North Coast Athletic Conference (NCAC) Championship finals on Nov. 7 (pictured here), Kenyon men’s soccer held a 2-0 lead over Ohio Wesleyan University (OWU) with a minute left in the match. In a span of 30 seconds, OWU scored two goals to tie the game.

With just two seconds left in regulation time, Jordan Glassman ’17 received a pass in the OWU box and was fouled. Jeremiah Barnes  ’16 (No. 10) stepped up to the penalty kick opportunity and sank the game-winning goal to set the score at 3-2 and bring the conference championship to Kenyon. 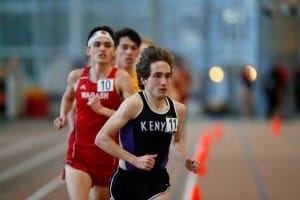 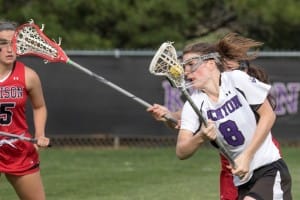 In a game against the College of Wooster on April 2, Jane Symmes ’16, Ladies lacrosse midfielder, brought her career total for draw controls to 242, beating the previous Kenyon record of 239. She graduates from the team with 277 career draw controls in just three seasons. (Pictured: Symmes plays at home against Denison University on  April 19.)

Sports deal in the finite. Although the triple-overtime games and double-digit losing streaks seem to last forever, no game has gone unresolved and no career does not reach its close. With their Kenyon careers coming to an end, senior athletes reflect on their four years and discuss all the building blocks and growing pains along the way.

“Sophomore year it was really tough. It took me a while to learn you can’t control everything, especially in baseball. Even when you’re pitching well, you get outside breaks and bad bounces.”

“Freshman year I sprained my ankle, and for eight months I couldn’t really run, so I was unable to stay fit. Sophomore year I was constantly dealing with my ankle being hurt. I realized I needed to take care of it, so I ran, stretched every day. I think I lost 30 pounds that summer.”

“I’m the youngest child. It was definitely a learning process.”

“I always try to keep the mood light and happy. You know, I’ll ride their butts every once in awhile, but the people I’ve had to be a leader for are leaders themselves. We’re very lucky.”

“How far we’ve come as a program is pretty exciting. I mean, my freshman year I came in and there were 11 on us on the team. I’m leaving and there are 21 of us.”

“Any of the medley relays from last year, just watching those guys break the national record, jumping up and down on the sidelines, cheering them on.”

“The best times from the past four years were being around the guys and just helping create a program where hopefully for people in the future, those will be their best memories.”

“They have come to be my best friends. I can’t really think of my Kenyon growth without including them.” 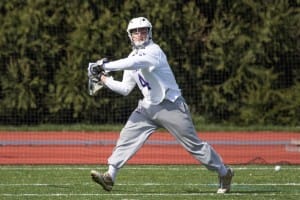 In recognition of a conference-leading 0.595 save percentage, the NCAC honored Patrick Shevelson ’16 on Wednesday with its Defensive Player of the Year Award for the 2016 men’s lacrosse season. Shevelson also received a spot on the All-NCAC team, an honor he has received all four years at Kenyon. (Pictured: Shevelson attempts a clear in an April 13 game against Oberlin College.) 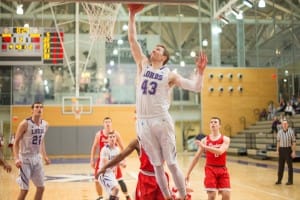 Comey and Connolly put a bow on Senior Day

In a storybook ending to the regular season, Lords basketball beat Wabash College 82-76 in front of a buzzing home crowd on Feb. 20, the Lords’ Senior Day. Tim Connolly ’16 crossed the 1,000-point mark for his career with 33 points on the night, and Brien Comey ’16 swatted away nine shots, breaking the previous Kenyon record for blocks in a game of eight. (Pictured: Comey dunks in a Feb. 10 home game against Denison University.) 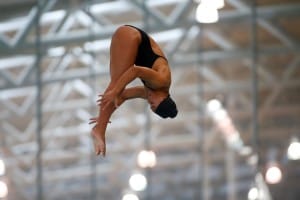 On the weekend of Dec. 12, diver Maria Zarka ’16 took her talents to the international stage at the 2015 Oceania Championships in Australia, representing the Kingdom of Tonga at the meet.