There wasn’t a cloud in the sky as Alex Blickle ’15 approached the tee box on the 10th hole. Putting aside the fact that this would be his last collegiate competition at Apple Valley Golf Club, home of the Lords golf team, Blickle stuck his tee into the ground and gently placed the ball on top. After last spring’s second-place finish at the North Coast Athletic Conference Championship Series, Kenyon and Apple Valley were awarded hosting rights for the first weekend of the two-weekend event.

When the last group of golfers finished on the 18th green and team scores were tallied, the Lords ended the first half of the championship series down by only 10 strokes to Wittenberg University, ranked number six nationally. Blickle shot scores of 72 and 75, good enough for a fourth-place spot heading into next weekend.

“I thought I did the most important thing well, which was to start strong and put myself in position to compete next weekend for the title,” Blickle said. “Most guys, even at the top, will have a bad round. If that 75 was mine, I love my chances.” 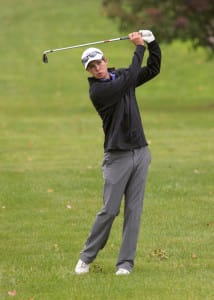 Blickle’s supporting cast also helped the Lords stay within striking distance of Wittenberg. Last year’s unsung hero, Jordan Harlacher ’16, finished with 75 and 78. Ryan Muthiora ’18 tallied 78 and 76, while Jake Fait ’16  shot 79 and 76. But the biggest surprise of the weekend was Mason McCool ’17, who played consistently and finished with two scores of 73, ending the weekend tied individually for second place. The team scored a total of 598 points over the course of two rounds.

Given that McCool had to qualify during the week in order to participate in the championship series, his performance came as a surprise to his opponents, but Head Coach Grant Wallace was not caught off guard by the feat.

“It doesn’t surprise me that Mason played well,” Wallace said. “He has been playing really well the last few tournaments, and has been dominating Apple Valley in practice and qualifying. I know this will give him a lot of confidence going into Springfield this weekend.”

McCool also commented on the confidence he built throughout the weekend that he hopes to carry  over into the final two rounds.

“My mindset going into the next rounds is to stay confident and try to replicate the feeling I had over the ball this past weekend,” McCool said. “Don’t put too much pressure on myself; just focus on putting up a good score for the team and see what happens.”

The Lords’ impressive season has been a testament to the work ethic instilled in the program. “The team knows what they need to do to accomplish our goals and have been doing that all year,” Wallace said. “Everyone on this team is extremely motivated to do well and ready for the challenge this weekend.”

As last season’s champions, Wittenberg has hosting rights for the final round of the Championship Series. The home-course advantage will give Wittenberg a perceived leg-up on the competition, but the Lords are used to pressure and poised to capture their first NCAC Championship.