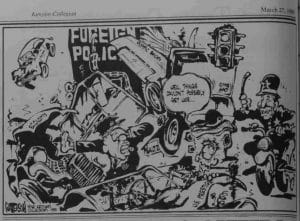 This cartoon, drawn for the 117th edition of the Collegian in 1980, was completed as Bill Watterson ’80 was finishing his four years at Kenyon and his tenure being the Collegian editorial cartoonist. Whereas current Collegian cartoons mostly center around the lighter side of Kenyon student life, Watterson’s cartoons typically concerned politics on the national level. Here, we see events such as the 1980 Summer Olympics Boycott, The Camp David Accords, and the economy suffering from massive inflation being depicted by a traffic pile-up with a grinning, bumbling constable character of the newly elected Ronald Regan riding in to save the day. Watterson’s cartoon reflects traditions of political cartoons as being caricatures of current events and allowing artists (and political science majors in this instance, as Watterson was) to express their opinions by way of print media.