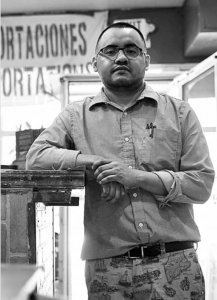 This Thursday, Nov. 7, a group of 17 Kenyon students will wake up in the early hours of the morning to prepare for an 8 a.m. appointment. However, rather than attending a class or heading to Peirce Hall for breakfast, these students will make their way to the Jacob K. Javits Federal Office Building in New York City in order to attend the final asylum hearing of Marco Saavedra ’11, a Kenyon alumnus and immigration rights activist.

The hearing will decide whether he will be allowed to stay in the United States or be deported to Mexico, where he has not lived since he was three years old and where he believes he will face persecution because of his status as an activist.

Scout Crowell ’20 first became aware of the hearing a week and a half ago at a meeting of the Latino/a Studies departmental board. She originally planned to focus on-campus efforts towards an online petition for Saavedra, which at that point had gained 2,500 signatures.

However, after receiving encouragement from professors and speaking with other students, Crowell, Paola Liendo ’20 and Camila Wise ’20 began organizing an actual trip to the hearing, eventually receiving enough financial support from Kenyon departments and professors for 17 students to attend.

Saavedra is known for his public and occasionally self-endangering methods of activism. These have included using his undocumented status to enter a deportation center in Florida and gather stories of detainees, as well as voluntarily self-deporting to Mexico in 2013 as a member of the Dream Nine, a group of young undocumented students. According to the Los Angeles Times, Saavedra was allowed to return to the U.S. when immigration courts determined he could move forward on his bid for asylum, which, after several years, has culminated in this hearing.

While students on the trip will miss class and sleep on floors, they believe that the benefits outweigh these discomforts.

This group of Kenyon students will be among a crowd of approximately 200 people who will show up to support Saavedra. The proceedings have received media attention from news outlets such as the New York Times, and the online petition on his behalf has reached 4,100 signatures as of Wednesday. Despite this, the outcome of the hearing is uncertain.

“Most of the time people are not granted asylum,” said Crowell, who has previously worked for an immigration advocacy group. “It’s a pretty awful system.”

Sofia Wilson ’23, one of the students attending, was more optimistic. “I’m really hoping that there’s a positive outcome,” she said. “But I also think that even if there isn’t …  it’s still important to educate ourselves about what really goes on in these [hearings].”

“It’s so important for us to be there and show solidarity regardless of how it turns out,” Liendo said.

To many making the trip to New York City, Saadevra’s hearing provided an opportunity to take concrete action. “I feel like a lot of times we feel like we’re in this bubble of Kenyon, that we don’t have access to do revolutionary things and we don’t have the ability to leave this place and make a difference,” said Wise. “The fact that we’re able to get so much support from our institution is incredible and it shows that … a lot of people at Kenyon care about this project and care about this kind of activism coming from students.”

The organizers encouraged students to attend other protests as well as to educate themselves about how they, if they are a U.S. citizen, can protect undocumented people from Immigrations and Customs Enforcement (ICE).

Liendo emphasized the importance of continued action beyond this hearing. “We shouldn’t just be doing this for him because he is a revolutionary activist and a member of the Kenyon community,” she said. “We need to extend that same empathy for people who aren’t in that situation.”