On Saturday, the Brown Family Environmental Center (BFEC) held its annual “Keep It Wild” festival to celebrate the Earth and appreciate nature. This year, the event attracted hundreds of people, most of whom were members of the community beyond Kenyon.

“It went really well. We got about 755 participants. It was a little less than we had last year, but considering the weather predictions for Saturday and it being Easter weekend, we were really excited and happy with the result,” said Maddie Morgan ’18, BFEC post-baccalaureate fellow and organizer of the event.

In past years, the festival was held at the Kenyon Athletic Center and featured other activities, such as a marathon. In recent years, however, the BFEC wanted to make the event more focused to better allow everyone to engage with nature.

“We wanted to look at our mission a little bit more and readjust the event to keep it more Earth Day-minded,” Morgan said. “We kind of wanted to reorient it towards looking at our native Ohio species and how we can help our wildlife.”

To facilitate the event, around 70 Kenyon students volunteered on Saturday. “I really love all that the BFEC does and it’s a great opportunity to connect with the community over something that’s so important to all of us: the Earth,” said Cameron Henn ’21, a volunteer at the event.

To continue the celebration, the BFEC partnered with the Office of Diversity, Equity and Inclusion (ODEI) and the Office of Green Initiatives to organize the “Earth Gay” project, a LGBTQ+ environmental sustainability initiative. Students in attendance had the chance to plant saplings native to Ohio.

According to Assistant Director of ODEI Timothy Bussey, this event was inspired by the work done by OUT for Sustainability, a nonprofit organization that aims to bridge and highlight the intersectionality between LGBTQ+ identity and sustainability values, and to mobilize the LGBTQ+ community for environmental and social action.

Once the trees are large enough to take root in the ground, some will be delivered to the BFEC while the rest will be planted on different parts of campus. Attendees also had the chance to plant flower seeds in small pots to take home with them. Some students took the opportunity to plant the flowers in front of Unity House.

In the next few months, as the flowers planted on Monday start to sprout in front of Unity House, it will serve as a reminder of the celebration while adding more color to campus. 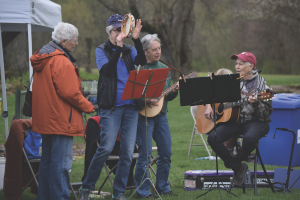