On the morning of Feb. 14, following days of rain, sleet and snow, the basement of the new retail and study spaces in downtown Gambier was three inches deep in water.

Mark Kohlman, Kenyon’s chief business officer, suggested that pipes could have become overwhelmed by recent rains and thaws. The downtown spaces feature drainage supplements throughout the buildings, though last week’s flooding raises questions about their effectiveness.

“We did as much intervention as we could underneath the concrete slabs to catch water — to keep it from coming up into the buildings — but we’re not sure yet what happened that caused all the systems that we have there to fail,” Kohlman said.

Kenyon has launched an official investigation into the source of the flooding, which spread from the northern end of the hall to the laundromat. The investigation will use cameras to look for any blockages in drainage pipes that might have caused water to overflow.

Since maintenance crews assessed the damage, Rainbow International Cleaners have placed dehumidifiers and fans throughout the space, and Kenyon staff have removed all of the baseboards and carpeting.

Despite Kohlman’s prediction that the space would be cleared of damage and crews within a week, the aftermath of the flooding and the cleanup process continues to affect the groups and businesses who use the space. The Gambier Deli’s pantry space and office have been difficult to access around the large cleanup equipment and shifted furniture.

When maintenance crews began removing water and airing out the space, the doors to the Deli’s office were left open, leaving confidential files and private documents exposed to anyone who passed by. Additionally, when crews drilled holes in the drywall to let the room air out, the Deli’s computers and printers were covered in dust. The presence of cleanup teams and their somewhat bulky equipment has prompted the owners to temporarily relocate their office to their kitchen table at home. Though the Deli’s closure on Feb. 15 was not a direct result of the flooding, the logistical inconveniences of the cleanup were a contributing factor in their choice to close their doors for a day.

Considering the old Farr Hall’s history of water coming through the doors, this inaugural flood could be a result of a fissure in the bedrock underlying the foundation, Kohlman noted. Given the uncertainty of what caused the flooding in the first place, occupants of the newly constructed downtown spaces have no guarantee that an event like this will not happen again. 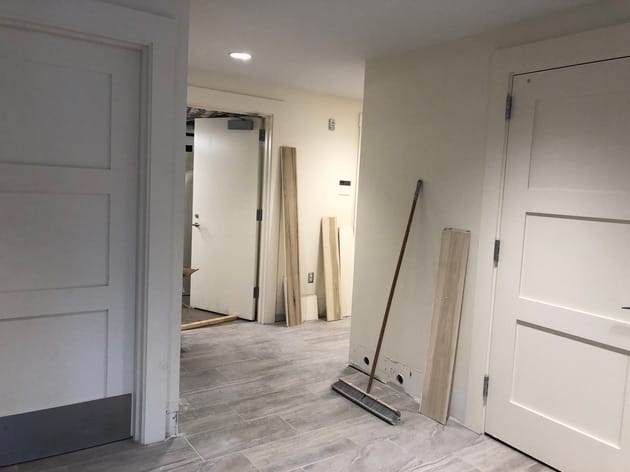 This flood also further delayed the completion of WKCO; Kenyon administration has an obligation to help expedite the opening of the station. WKCO lost its building, was given minimal, sub par storage space, and was forced to operate with very little resources for well over a year. Why has the station been virtually abandoned?

Wouldn't a geotechnical soil analysis prior to construction addressed the issues of where the water table is in relation to the designed foundation?

PeterHAHAHA! You expect the comedy duo of Gund Partners & Kenyon to do something thoughtful and pro-active like that when instead they can waste millions repairing (without solving) yet another Gund-caused permanent infrastructure crisis? Just think how well this same team will engineer and construct a massive underground parking structure below the ridiculous Gund Master Plan folly on west campus ON THE SAME WATER TABLE! glub glub glub

You could say that the project didn't go Farr enough...

It's the ghosts of Kenyon coming back to haunt us. They clearly prefer the new Fiesta.

If they think it rains hard in February wait until the thunderstorms of summer arrive. WKCO may be better off not rushing to get into their new space.