More than two months after black students circulated an open letter titled “You Are Not a ‘N-Word,’” administrators and students are still working to address incidents on campus that, as the letter states, leave black students feeling “targeted, hurt, and silenced.”

Most recently, Community Advisors (CAs) in Caples Residence Hall and Diversity Advisors (DAs) held meetings with residents of the building on April 29 to discuss vandalism in the Caples elevator that some students of color “perceived as threatening,” according to Jenna Rochelle ’18, a north campus Head CA. The vandalism began when a student hung up a poster advertising the April 6 and 7 staged readings of the play Baltimore. The poster featured a character wearing a shirt that bore the hashtag “#BLM,” denoting the Black Lives Matter movement, whose mission is to intervene in violence inflicted on black communities, according to their website. Someone then tore the hashtag out of the poster.

In response to the vandalism, some residents began writing “#BLM” and “#BlackLivesMatter” on the elevator walls, which are already covered in drawings, art and messages. Someone then crossed out one of the hashtags.

On April 17, Teddy Hannah-Drullard ’20 posted a photo of the crossed-out hashtag on Facebook and wrote, “Some people just like to hurt people.” 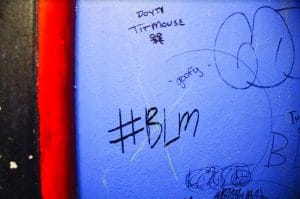 The April 29 meetings focused on community dialogue and civility, according to Assistant Director for Upper Class Residences Jonathan Blount, but residents also discussed promoting inclusion in the building. “It was also about looking at how to make all of the residents of our community feel safe … and kind of helping people understand why certain actions might be threatening to other residents of the community,” Rochelle said. Caples is currently home to theme housing for both the Men of Color (MoC) and Sisterhood.

The conversations surrounding the vandalism are one of several actions that faculty and administrators have taken this year to address issues of race and inclusion at Kenyon. Jacky Neri Arias ’13, assistant director of the Office of Diversity, Equity and Inclusion (ODEI), cited a racial trauma group run by the Counseling Center and ODEI’s effort this year to recognize “groups that are culturally affiliated or do some sort of diversity work on campus … for their service throughout the year.”

The Community Planning Group (CPG) recently sent a list of recommendations to President Sean Decatur based on notes collected from the 20 small group meetings facilitated by the CPG on April 3. The CPG recommended that the College bring in programming, perhaps through the Difficult Dialogues National Resource Center, to train faculty and staff on leading “difficult conversations” and change the diversity and inclusion component of Orientation, according to Decatur.

Juniper Cruz ’19 agrees. Cruz appreciates that administrators place students on committees to discuss policy changes, but she would like to see some faculty members and administrators take the lead on these issues instead of relying on student work. “I think there is a time where staff members who are in charge of doing the work to ensure a stronger community and a more accepting community have to do more self-education and stop relying on students to change the school,” Cruz said, “because it is really coming down to a few students who are overworked, and it’s exhausting and daunting.”

Sutton believes the administrators care about making Kenyon more inclusive, and he noted that apathy, especially in the student body, is a significant obstacle to making progress toward that goal.

Sutton also emphasized that this is not an issue exclusive to Kenyon. He referenced recent incidents at DePauw University in Greencastle, Ind. The incidents included a racist threat found in a restroom and a racist slur spelled out with rocks in the DePauw Nature Park, according to a May 2 Indianapolis Star article.

“We have to do better,” Sutton said. “It’s not just Kenyon, if it’s other colleges in our conference. … This is clearly a bigger problem.”