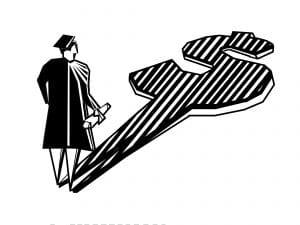 A piece of legislation moving through Congress could make it easier for prospective higher education students to apply for financial aid.

The Promoting Real Opportunity, Success and Prosperity through Education Reform (PROSPER) Act was first enacted in 1965 to support resources for higher education. Congress reauthorizes the act every four to six years, providing lawmakers with a chance to improve and update the existing legislation. Congress has fallen behind in renewing the act. The gaps between reauthorizations have gone from six years (1992 to 1998), to 10 years (1998 to 2008). The law has not been renewed since 2008, according to a U.S. News and World Report article published in December.

The PROSPER Act recently passed through the Committee on Education and the Workforce. The passage of the Committee’s version of this act could make institutions of higher education more financially accessible to low-income students, according to the U.S. News and World Report article.

The act proposes ways to simplify and streamline the Free Application for Federal Student Aid (FAFSA) process. According to the Committee’s version of the act, a more user-friendly form would allow students to apply for federal student aid with income data from two years prior to the date of application. Under the act, FAFSA would also be available on a mobile app.

The act would make the information required by FAFSA more closely aligned with information families are already required to provide for federal taxes. Families with an annual income of less than $100,000 will be able to use the shorter version of FAFSA currently only available to families with less than $50,000 annual income. The act would also streamline federal student aid into a single funding tool.

The updated act would require the government to work with institutions of higher education, state governments, high schools and other educational programs to ensure that students are well-informed about financial aid before they have reached their sophomore year in high school. Students and parents of children receiving federal financial aid will be required to go for “enhanced” counseling to officially affirm that they understand the terms of their loans annually, according to the act.

The act would allow educational institutions more flexibility in developing creative methods of postsecondary education, according to the act.

Kenyon already has programs that align closely with the innovative learning section of the PROSPER Act. The College calls them “high impact practices” and has hosted an annual event called “Celebration of High-Impact Practices” (CHIPs) since 2015.

High impact educational practices offer learning opportunities for students that are immersive, interactive and promote local and global engagement, according to a recent email sent out to the campus by administrative assistant Andrea Lechleitner. These include artistic projects, various performances, internships and research projects. This year’s CHIPs celebration will take place in the Kenyon Athletic Center on April 5.