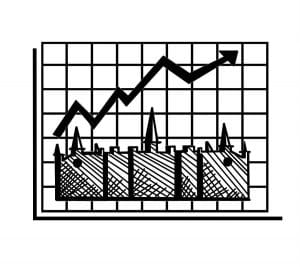 What would happen to Kenyon if the endowment didn’t perform well in the stock market? After recent volatility in the Dow Jones — a price average of 30 significant stocks traded on the New York Stock Exchange — over the past few weeks, the Collegian asked Vice President of Finance Todd Burson what steps the College would take if the endowment experienced a significant devaluation.

Burson said having a small endowment may be beneficial when it comes to managing investment risks.

“We have a fairly small endowment,” Burson said. The College’s endowment was $208.9 million as of 2016. “So if there is a big market correction, and you don’t have a lot of money in the market, you don’t lose a lot.”

Burson explained that the College’s investment firm (Cornerstone Partners LLC) only invests enough to cover what the College spends for its operating budget, plus inflation. The College looks for a six to seven-and-a-half percent annual return on their investments. However, the College has an active investment strategy.

In the case of a stock market crash, the College could recover, Burson said. In the worst case scenario, the endowment would probably decrease in value by 20 percent, similar to how much the College lost in the 2008 housing market crash.

“In 2008 when the market lost about 40 percent of its value, the way we were invested, we only lost 19.8 percent. So we didn’t lose nearly as much as we could have,” Burson said. He added that schools with larger endowments had to borrow money in order to pay their bills. Kenyon’s operating budget still decreased, but not as much as did the operating budget at other institutions.

The College would still feel the effects of a downswing in the market.

Burson said that the College would have to evaluate all of its expenses and see where it might have to cut down on spending. These areas might include the financial aid budget, potential new hires and construction projects and could mean a tuition increase.

“What would happen in that situation is that we would put everything on the table, and we would say, ‘What are the items that impact the academic program the least?’” Burson said. “If we don’t have the academic program at the College, and students aren’t going to want to come here, then we have an issue.”

President Sean Decatur said that part of the reason why the College’s operating budget wouldn’t suffer as much as some other institutions’ is that Kenyon is so tuition-dependent. What concerns him more is how a potential crash might affect families, which may impact the College’s financial aid budget. If a student’s family situation changes, the financial aid package may change as well.

“What goes down eventually goes back up,” Decatur said. “What I think is a bigger worry for us is that, when market returns take a serious hit and are declining, that’s impacting the larger economy, it’s impacting the financial situation of many of our families.”

Burson said that there could be a downturn in the market in the next few years, but that those are not always a bad thing, and the College could take advantage of the correction.

“I am a little worried in the short term about a correction especially because of the length of the recovery we’ve had in the last ten years,” Burson said. “But on the flip side, those are great buying opportunities.”