After the faculty voted two weeks ago to strip her and her colleagues of the right to vote in faculty meetings, Karen Greever, collection development librarian, left the meeting. She doesn’t plan on going back.

“I was very disappointed, disheartened,” Greever said. “I’ve been attending meetings and voting for 18 years, ever since I came to Kenyon, and I still don’t understand what the rationale for the change was.”

Last year, the secretary and chair of the faculty tasked the Faculty Affairs Committee (FAC) with revising language in the faculty handbook on who should vote in meetings and who shouldn’t. Several Library and Information Services (LBIS) staff members no longer have a vote on legislation, which informs most aspects of students’ academic lives, touching on issues such as new areas of study, course evaluations and Campus Senate. Librarians will still have a voice in the meetings, though Greever said she doesn’t plan on attending any more.

“If my opinion is not worthy of a vote, I’m not sure what weight my voice would carry,” she said.

The legislation also stripped voting power from emeritus faculty and several College vice presidents, and the decision has raised questions among some faculty about how inclusive such meetings should be, or even if meetings of the faculty should be limited to professors.

“There are many options for how to determine who is faculty,” said Associate Professor of Biology Drew Kerkhoff, who introduced the legislation as chair of the FAC. “We made judgment calls about that.”

At the faculty meeting on Feb. 15, some 40 people approved the new legislation, with about nine opposed, including four members of LBIS, according to Professor of Religious Studies Ennis Edmonds, who was a vocal opponent of the new rules. Professor of Biology Joan Slonczewski, faculty secretary, declined to give the exact breakdown, writing in an email to the Collegian, “Sorry, the Faculty Meeting deliberations are closed.”

Greever and Carmen King, fine arts and humanities librarian, were the only two librarians in attendance whom the legislation affected. They felt blindsided when Kerkhoff passed around a proposal that didn’t include the professional librarians as voting members — a change to a previous draft of the legislation introduced in January.

“Quite honestly, the chair of the committee did not present a valid reason(s) to eliminate the librarians as voting members at the meeting,” King wrote in an email to the Collegian. “I was not on that committee (although I have served on other faculty committees) and was saddened by the February vote.”

Kerkhoff wrote in a follow-up email he didn’t submit the revised proposal beforehand, due the Thursday before the Monday meeting, “for a combination of personal and professional reasons. … That was my fault.”

Library Director Amy Badertscher said the vote affected eight librarians, as well as an open position, though Kerkhoff noted the language of “professional librarian” made it unclear who could or couldn’t vote.

“It’s possible that more than two librarians were affected by this outcome, because it used to be ‘professional members of the library staff,’ but we have no idea what that means,” Kerkhoff said. 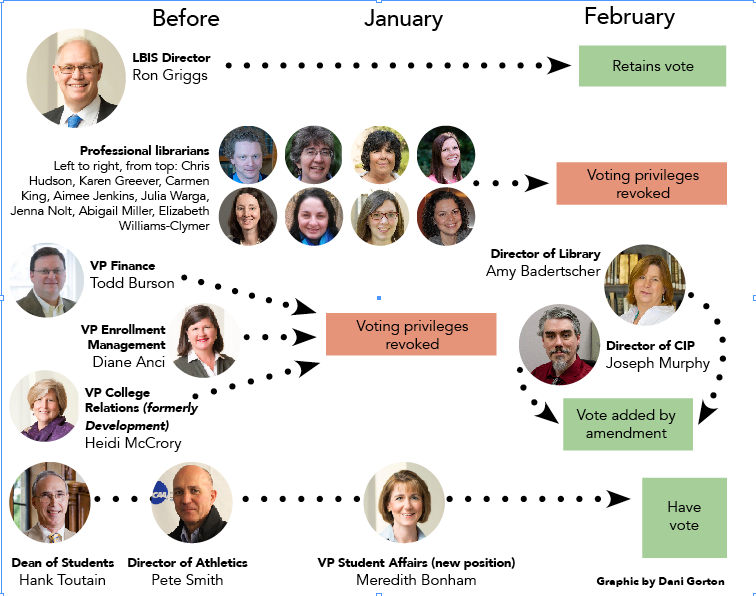 After the librarian positions were removed from the list of voting faculty in the February meeting, Badertscher was added in an amendment, as was Joseph Murphy, director of the Center for Innovative Pedagogy.

In deciding the criteria for membership, the FAC relied on language in the preamble to the section in the faculty handbook on faculty meetings, which states, “Those persons holding appointment to positions in the College that require them to be immediately and continuously involved in teaching or making academic policy shall comprise the faculty meeting.”

Professor of Mathematics Carol Schumacher, chair of the faculty, said the list of those who may vote in faculty meetings hadn’t been updated since 1995 and that several offices and position titles changed in the interim, making the language ambiguous.

“This is really why this was done,” Schumacher said. “There was no hidden agenda associated with anything other than the fact that those rules were unclear.”

Some professors left the meeting dissatisfied.

Edmonds said he felt like the vote was motivated by “a hidden script that I am not aware of.”

He added that librarians were essential to his work.

“I couldn’t function in my faculty capacity without them,” Edmonds said, “and yet there’s disenfranchisement, and it bothers me that we think we should make policy and say, ‘Here, carry it out.’”

Schumacher said she never fully understood why the FAC did not designate professional librarians as members of the faculty.

“I didn’t get the rationale,” she said. “I was leading the meeting, I wasn’t speaking. I think there was simply a difference of opinion about what constituted the making of academic policy.”

The presentation of that criteria of who is faculty — those actively involved in teaching or making academic policy — caused Sarah Heidt, associate professor of English, to ask why the director of athletics position, held by Pete Smith, continued to have voice and vote, according to minutes of the February meeting obtained by the Collegian.

Kerkhoff said assistant athletic directors are involved in teaching health and sports studies courses, which is why their director has a vote in meetings.

In addition, the relationship between academics and student affairs is “particularly important to the academic mission of the institution,” Kerkhoff wrote in a follow-up email, explaining why holders of such positions as dean of students and vice president for student affairs have a vote in faculty meetings. “A similar rationale can support the inclusion of the VP for LBIS and the Director of the Library, in order to maintain relations between the Academic division and LBIS.”

Members of LBIS teach more than 90 classes a year and nearly 1,200 students, according to King.

“If an important function of the faculty meeting is to approve changes to the faculty handbook, which are our terms of employment, then why are people who are not governed by those terms voting on them?” Powell said. “That’s a reasonable question.”

Professor of Political Science Fred Baumann made a case at the meeting for seeing the university system as a “medieval guild” of teachers and students focused on scholarship.

“At some point I thought symbolically it’s important to say, ‘Hey we’re the faculty and this is our guild and we deal with the most essential things about the College,’” Baumann said.

H. Abbie Erler, associate professor of political science, was one of the few professors who opposed the new rules.

“I think the consensus was, ‘Well there’s only two of them, so what’s the difference if they get kicked out from having a vote?’” Erler said. “It felt like maybe an issue that could have been handled better, in that when you hire new librarians you make it very clear that they’re not part of the faculty, rather than kicking two people who have been here a really long time off.”

Whether librarians are counted as faculty varies from college to college. For example, Denison University restricts librarian votes to matters related directly to the library; Grinnell College’s librarians have a vote at faculty meetings; and those at Hamilton College do not, according to spokespeople at those schools.

A few administrators, including Heidi McCrory, vice president of college relations, and Todd Burson, vice president for finance, said they supported losing their own votes.

“I have always been a little confused as to why the VP for Finance had voting privileges in faculty meetings,” Burson wrote in an email to the Collegian, “so I think that this change makes perfect sense.”

Schumacher stressed the update was to clarify the language about what job titles at Kenyon count as faculty.

“What I think is really, really important in this discussion is that we have to remember that this is not about people,” Schumacher said. “It is about positions.”