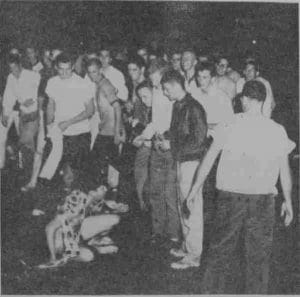 Tradition at Kenyon has always been a significant part of the school’s ethos. From long-standing superstitions — like those which prompt students to avoid the cursed Peirce seal, or tell them to navigate through the Gates of Hell on the same side as a friend — to more recent additions to Kenyon lore, traditions link Kenyon students young and old. Even those rituals which elicit grumbling or ridicule are treated with a certain degree of fondness by the Kenyon community, viewed with grudging nostalgia as forming some underbelly of the school’s spirit. Yet in the fall of 1961, a debate raged at the College over one of its longest traditions, the “Fuzzies Debut” — also known as the Pajama Parade — and the “Crawl,” a brutal one-two punch of hazing during “Freshman Hell Week.” Just a decade later, Kenyon would say goodbye to one of its most controversial rituals, a ritual remembered fondly by some and with polemical criticism by others.

Though less is known about the origins of the Crawl, the annual Pajama Parade was said to date all the way back to the College’s founding in 1824. One night every year, sophomores would gather in front of the first-year dorms and, according to some accounts, either coax or drag the pajama-clad first years from their dorms. One retelling of the event from the Collegian in 1961 by novelist and Writer in Residence PF Kluge ’64, a sophomore at the time, paints a vivid picture of its opening act, which began as students shouted “fuzz,” a nickname for first years: “‘Fuzz… fuzz… fuzz’ — a mono-syllabic battle cry that echoed all over Marriot Park,” — a now forgotten name for the land between the Gates of Hell and Old Kenyon — “alternating with another slogan, a polite paraphrase of which might be ‘What amount of posterior flesh is it within our capacity to pound tonight?’ The answer was not long in coming… in spontaneous eruption… freshman, wet covered with shaving cream, were dragged out of the dorm.”

Many reports of the Pajama Parade and Crawl reflect the same sentiment of playful disdain apparent in this narrative. In a 1941 Collegian article, one upperclassman wrote in anticipation of the Crawl that “Freshmanus Kenyonesis, that small parasitic animal found every Fall on this campus, has just made its annual appearance.” He continued with anticipatory glee: “The sophomore conservation department has declared an open season on this infestinimal form of human organism.” He finally joked that the first-year class was set to make “a very close investigation of the flora and fauna” on campus as they engaged in the annual Crawl. In addition to significant support on campus, the hazing ritual had the backing of Kenyon’s administration as well, lending an official air to an otherwise crazy tradition. Kluge’s account mentions several members of the administration in the crowd — including Dean Thomas Edwards, Director of Scholarships J.D. Kushan and Dr. Jess Falkenstine — were there to protect athletes “from the rougher forms of conflict.”

Yet the rituals were not without complaint. In an account of the Crawl written in 1939, one freshman wrote: “Sure I’m griping — you would too if you’d been there. How would you enjoy lining up against a building blindfolded, hearing your classmates yell when they got drenched with water from the windows, waiting and hoping the next deluge wouldn’t be you, only it was.”

The description of the rest of the Crawl is a brutal one. First years were forced, still blindfolded, to “grab the legs” of the students ahead of them as they were led across campus, enduring “gravel paths,” “acorns” and “just plain hard ground.” Throughout the Crawl they’d face ridicule from their sophomore assailants. At one point, the first year writes, “some bright sob got the idea that we were as good as dogs, so we played Fido around a great big tree,” just one iteration of the “little acts” the first years were made to perform every year for general amusement. That year’s class of first years were then forced into a grand finale, where by tradition they entered a “mud wallow,” dug annually by the first-year football team. The writer describes it as an “episode of playing piggie in a sty.” Despite the clear brutality of the tradition, opinion was split throughout most of Kenyon’s history on the practice. One writer makes note that their class of first years “came out still smiling,” and even the first year in 1939 ultimately stood in favor of the tradition, which he viewed as a masculine introduction to college life. “Everyone seemed to think it could have been a lot worse,” he wrote. “After all there is a ‘man’ on the end of our class name, and there is something in playing the game.”

It was in the fall of 1961, however, that the Pajama Parade finally saw its reckoning. Taking a stand in the Collegian, Kluge weighed in a subsequent editorial: “Some freshman, we are informed, share this newspaper’s opinion that the pajama parade is a senseless, painful ugliness, passed on from year to year under administration smiles as ‘tradition.’ That the tradition is brutal and stupid, degrading and disgusting has apparently been overlooked.” First year Al Vogeler ’65 that same year took an even more impassioned stance on the brutality of the tradition. “The animal like display of simple brutality at the freshman pajama parade was more an example of sadism than of meaningful or good natured custom,” he wrote.

His depiction of the events following paint them as so savage it defies abbreviation: “The expression of utter joy on the children’s faces as they beat on the head of a fallen classmate made me ashamed to be in the same school with them. Face down in the gravel, this boy was strapped across the neck and beaten over the head several times before he could stagger to his feet and stumble the rest of the way before lashing belts and paddles. I observed another freshman leaning against a tree desperately clutching his gut, where one sophomore had hit him with a paddle, swinging into him as he ran.’”

Despite the rise of strong student opposition to these traditions, it wasn’t until eight years later that they finally saw their collapse. Rather than falling due to student opposition, however, the beginning of coeducation at Kenyon was the nail in the coffin for these hazing rituals. Finding perhaps that it would be inappropriate to continue the ritual as women moved onto Kenyon’s campus, the administration finally ended one of its most beloved, hated, bizarre and cruel traditions.