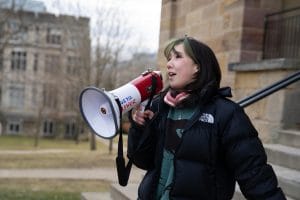 Kenyon is making history as a majority of Community Advisors (CAs), Teaching Assistants (TAs), Writing Center Consultants and Library and Information Services (LBIS) student workers participate in an indefinite Unfair Labor Practice strike against the College. But the lived experiences of these student workers extend far beyond what any news article, piece of gossip or mass-email chain can fully capture. For the students on strike from the very work that they ardently love, this is deeply personal.

The 2022 spring term marks the seventh semester that Betania Escobar ’22 has worked as a TA for Kenyon’s Department of Modern Languages and Literatures (MLL). Back home in Houston, Escobar discovered her passion for educating through her engagement in a teaching program for middle school students. When she arrived in Gambier in 2018, she brought this passion for education — along with her love of her Spanish-speaking identity — to Kenyon’s MLL department. “Coming here to Kenyon and being able to share a part of myself, which is my Spanish-speaking identity, was something that was really special to me,” she said. “I was able to not only get in the practice of being a teacher and practicing what it means to be an educator, but also getting to share parts of my culture with other students.”

Through the opportunity to share her personality, culture and language with others, Escobar said she developed a better sense of identity and self-confidence. As a TA, she came to view herself as an invaluable student, educator and member of the greater Kenyon community.

She just wishes that the College, as her employer, would come to see her in that way, too.

When Escobar decided to strike, she knew it was ultimately the right choice, although it certainly wasn’t the easiest one to make. “I want to be an educator and so having to withdraw myself from this position at Kenyon —from this place and this program that really helped mold me as an educator, and that has given me the opportunity to connect with students and to share knowledge — it’s sad to me that I have to give that up,” she explained.

By withholding her labor, Escobar hopes Kenyon will come to appreciate the arduous work she has performed during the last few years. She expressed her desire for Kenyon to make TA training a paid part of the role, to provide more opportunities for TAs to learn specific teaching methodologies and, most importantly, to value the labor of future TAs to come.

Similar to some of Escobar’s adverse experiences as a student worker are those of Sally Smith ’23, a student assistant at Special Collections and Archives in Chalmers Library. Smith has seen first-hand how Kenyon handles complaints about the College’s labor practices, in the present at her work environment, and in the long term through her research into the institution’s history.

This semester, Smith has worked on an exhibition case focusing on Kenyon’s labor history. Her research dives into the intricate work experiences of past employees at the College. “I found it’s been incredibly interesting to go through faculty minutes and see whatever faculty were fighting for tenure in the ’40s,” she said, “and to be able to learn about the Bookstore and administrative assistants for the 2003 organizing drive before they were busted.” Smith hopes that some of her research can be used to educate fellow students on their community’s long-term fight for better work conditions.

Last week, Smith joined many of her peers and decided to strike, something that is no small sacrifice to her: In addition to possibly losing out on future work opportunities, Smith may also lose the chance to complete her research project. At this point, though, she believes student workers have exhausted all other options. “It’s really frustrating that Kenyon has put us in this position. We’ve tried to talk with administrators, we filed for an election, we’ve gone through the legal processes and they’re trying to stop those legal processes,” she said. Smith hopes the strike will serve as a final push for Kenyon to address the concerns its student workers are facing.

Many student workers tentatively plan to join in on the K-SWOC strike. One of those individuals is Emma Kang ’25, who works on the curatorial team at Gund Gallery, writing wall texts and narrative guides for the Gallery’s exhibitions.

According to Kang, if she were to join the strike, it would be out of a deep love for her job. Since she aims to pursue curatorial studies in her future, Gund Gallery was a huge selling point when she decided to attend Kenyon. “This is an entry point to that career I’m searching for,” she said. “I cried when my first wall writing went up because this is a dream of mine, to have my writing up at a museum — my interpretation and my autonomy.”

Despite her feeling that the work conditions at Gund Gallery are relatively sound, Kang has considered joining the strike. She believes Kenyon’s unfair treatment of other student workers on campus may reflect how Kenyon values the labor of Gund Gallery Associates. “The Farm wasn’t expecting the residential program to just suddenly be taken out from under them. So that means funding can be taken away from Gund, too,” she said. “If we let the administration get away with this decision, then we let them get away with anything else to any other program in the future.”

The K-SWOC strike poses itself as a personal sacrifice for all that join in, but each striker has one thing in common: a vision for great change in the Kenyon community. As the intensity of this colossal moment heightens, an increasing number of student workers may find themselves with the difficult choice of risking the jobs they love for the greater purpose of improving workplace conditions for future generations of Kenyon students.