“I went on a little trip with the KenyonExeter program to Lands End and St. Ives. When we were in St. Ives, we were all put into this bus, so it was just me and all the Kenyon Exeter people. We went on this trip, we drove to a bunch of different places. We drove to this lighthouse which is from Virginia Woolf’s To the Lighthouse — that’s the lighthouse she was looking at when she wrote the book. We also went to this little place, I can’t really remember the name, but it was these rocks in a circular formation. The legend was that people came out to dance one night there and when it struck midnight they turned into stones. So, because of that we all danced around in a circle around all these rock formations. [Associate Professor of English] Sarah Heidt [’97] and [Professor of English] Sergei [Lobanov-Rostovsky] got in on it too. It was just this really cute moment.”

“Over break, a couple of other students and I went to Chicago to have fun in the city, but also for jobs. While we were there, Oubadah Alwan ’19 and me went out to a drag show club and weekly party, entitled ‘Queen!’, with our friend Em Green ’16. It was really fun, we got to see some of the local scene. The highlight for me was that we saw the kind of big drag artist Imp Queen. They weren’t performing, they were just kind of there, but it was interesting and provided a unique perspective seeing our good friend Em kind of doing drag networking. They had to network and schmooze with these other drag artists while music was happening. We were in the all-gender bathroom, because that’s where you go to schmooze. But Imp Queen, they were pretty much naked, but on their forehead it said ‘no cops’ in rhinestones. They had that because a week before, two trans women at a club were arrested because a barkeep called the cops on them. So this was part of a protest to not call the cops or authorities on trans people, especially trans women of color, and emphasizing the need to learn how to deescalate situations within the queer community. So that was kind of neat, to see a piece of art and activism and also just a very interesting look on a famous queen.” 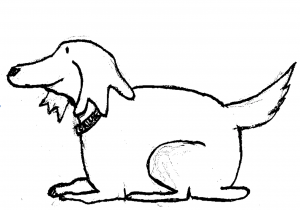 “With the Outdoors Club, we were planning on doing our spring break trip as a backpacking trip in North Carolina. On the day we were supposed to start our hike, it was pouring rain. We passed a little dog on the side of the road looking very cold and wet, looking really lost. We drive by and we’re like, ‘We gotta go to our hike, we hope that works out okay, we hope they find their owners.’ We get to where we think the trailhead is, but the road’s blocked off to the campground — it turns out it’s out of season.  As we’re driving back we see the dog: still outside, so cold and wet, now running in the opposite direction, clearly just so lost. We decide that we can’t just leave this dog out here.

So we pull over, get out of the car, the dog runs right over to us — she’s very sweet, her name’s Callie, she’s from Atlanta. We just pick her up, we wrap her in a coat and get back in the car. We try calling the number on the tags: no luck. We eventually connect with the owners, who had been driving back and forth a couple times. They happened to own a property right nearby, and we could come and pitch our tents there or stay in her bunkhouse if we wanted. Two minutes later we pull into this private property. It’s an organic farm, there are houses on the property. It’s so nice, it’s got this fancy little pavilion facing this beautiful river. So we just hang out there for the night, spend the night in her bunkhouse. It was really, really cold. Then on, we were like, ‘Okay, we’re just gonna do day hikes.’ It ended up being a great trip and it was all thanks to Callie.”