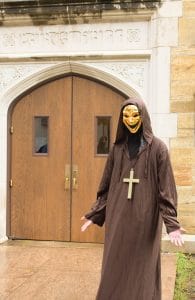 Jaret Dan’s ’21 costume idea began with a store-bought monk’s costume. “I figured I should get a creepy mask as well, because it’s Halloween,” he said. Dan, who spent most of the day in costume, scared a few students. “The first people I encountered in the elevator asked me if I was the Illuminati,” Dan said. “I’m really whoever people want me to be.” 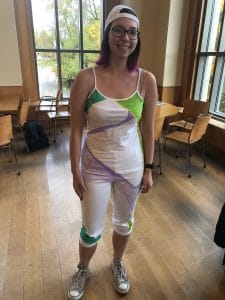 Jessie Griffith ’19 dressed up as the Olin Wall (the construction barrier around the West Quad site) as part of a group costume this Halloween. She originally wanted to commemorate the recently destroyed Olin-Chalmers Memorial Library, but decided that the wall was a stronger choice, as more people could be included in the costume. However, after Oct. 28,  the group decided to make some minor changes. “After the fall, [Isabella Blofeld ’19] has a rip [in her shirt] and has a picture of a construction site right behind it,” Griffith said. 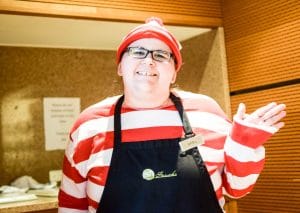 AVI employee April McDonald gave a wave while bringing some color to the dish return in her “Where’s Waldo” costume. “[Waldo’s] just one of the classics,” McDonald said. “He was always fun as a kid, and everyone knows who Waldo is.” 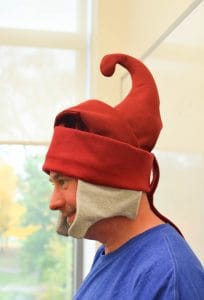 Growing up, Professor of Mathematics Bob Milnikel’s favorite writer was James Thurber, a children’s author and humorist. At the end of his life, Thurber wrote a book titled The 13 Clocks. Thurber described one of the characters, the Golux, as wearing an “indescribable” hat. “I decided I would be the Golux for Halloween, and asked my friend Amber if she would make me the indescribable hat,” Milnikel said. “I sent her some pictures, and she came up with this, which I think is just brilliant.” 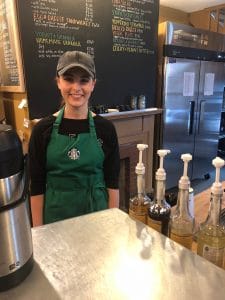 Several of the baristas at Wiggin Street Coffee dressed up this Halloween. Many wore very elaborate makeup and face paint, but the most noteworthy costume was by far the most subtle one: Savannah Baterman, who dressed up as a Starbucks barista. “I thought [the costume] was really funny,” she said. The apron came from a co-worker, who had previously worked at Starbucks. 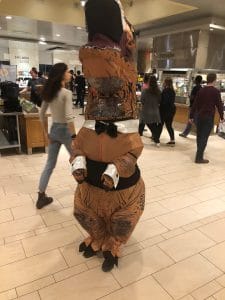 Walking through the servery at dinner this Halloween, it was impossible to miss Julia Borys ’21 in her inflatable dinosaur suit. Though she seemed to struggle as she weaved her way through the crowds of hungry students, Borys was clearly very excited about the costume. “I had always wanted [an inflatable dinosaur suit] and had seen videos on the internet, and was jealous, so I bought one,” she said. Borys wore the costume last Halloween, but this year she chose to add a Playboy bunny costume to the suit. “[Last year] I made a bunch of jokes that there were two types of people on Halloween: the ones that wear barely any clothing and the ones that are just weird, and I was the weird one. So this year, I decided to be both,” she said.