Over the past year, two new buildings for the Department of English have been under construction. They have yet to be officially named. Temporarily dubbed the “English Cottage,” the building immediately adjacent to Lentz House saw faculty members settle into new office space on Aug. 27. The other is still incomplete, but it is currently scheduled to be ready for use by the middle of fall semester. English seminars currently taught in lower Peirce will be relocated to the new building upon completion.

Over the summer, library services relocated to the modular units on Peirce lawn. Library Building A hosts staff offices and classroom space. Library Building B hosts Access Services, reference and research assistance and Helpline. The new book collection, current periodicals and reference materials can also be found in Library Building 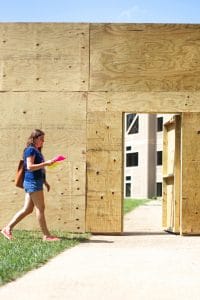 B. Library Building C hosts Special Collections and Archives, the digitization lab and the metamedia lab — a collection of Apple iMacs with Adobe Creative Suite and other software unavailable on many campus computers.

Student Accessibility and Support Services (SASS), previously located in Olin and Chalmers Memorial Library, now has its main office on the third floor of Peirce Hall. Director of SASS Erin Salva has relocated to an office within the Counselling Center and the Writing Center, also previously in Olin and Chalmers, has moved to the third floor of Peirce Hall.

The demolition of Olin and Chalmers will begin in October. Asbestos abatement — the removal of the toxic material used widely in construction until the 1970s — and the recycling of certain building materials will proceed before standard demolition commences.

South Lot 3, located south of the outdoor tennis courts, has brought 145 new parking spaces to campus. These spaces are designated specifically for students, to compensate for the many older lots being redesignated for faculty and staff. These changes were necessitated by the loss of the faculty and staff

Previously designated as a lecture hall, Philomathesian Hall on the second floor of Ascension Hall has be repurposed as a study space. Furniture has moved to Philomathesian from Olin and Chalmers Memorial Library. 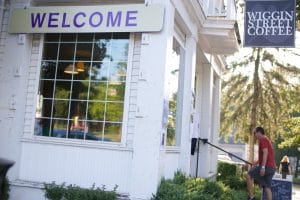 Another modular unit has opened on the lawn between Norton and Watson Residence Halls. This unit features study space, desktop computers and a printer.

In Jan. 2017, a new Black Box Theater was opened on North Campus, between Gaskin Avenue and the Craft Center. This new venue for student productions replaced the old Black Box Theater in downtown Gambier, demolished in summer 2016 to make way for the current location of the Village Market. As of Aug. 15, the new theater has been officially named the Harlene Marley Theater. Harlene Marley H’05 served on the drama faculty from 1969 to 2005, and she was notably the first woman hired by Kenyon as a tenure-track faculty member.

In response to a trend of racially insensitive defacements of the Caples Hall elevator, the elevator has had its interior painted entirely black. The elevator previously featured a space-themed mural, on which numerous students had written jokes, quotes and other messages.

Progress has been made on the retail developments in downtown Gambier. The construction project immediately adjacent to the Bookstore is scheduled for completion in October and will house the Gambier Deli, which had been out of operation since the destruction of Farr Hall in the summer of 2017. The two other construction projects are estimated to be completed by the end of 2018 as their targeted completion dates. The middle building will house Chilitos Fresh Mex and Margaritas, a new restaurant from the owners of Fiesta Mexicana in Mount Vernon. The northernmost building will house study spaces until the completion of the new library, at which time its purpose will be reevaluated. Student apartments will occupy the upper floors of all three buildings, and these will accommodate students beginning spring 2019. 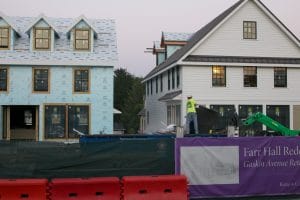