Students share some of their experiences from their past semester off the Hill.

Interviews have been edited for length and clarity. 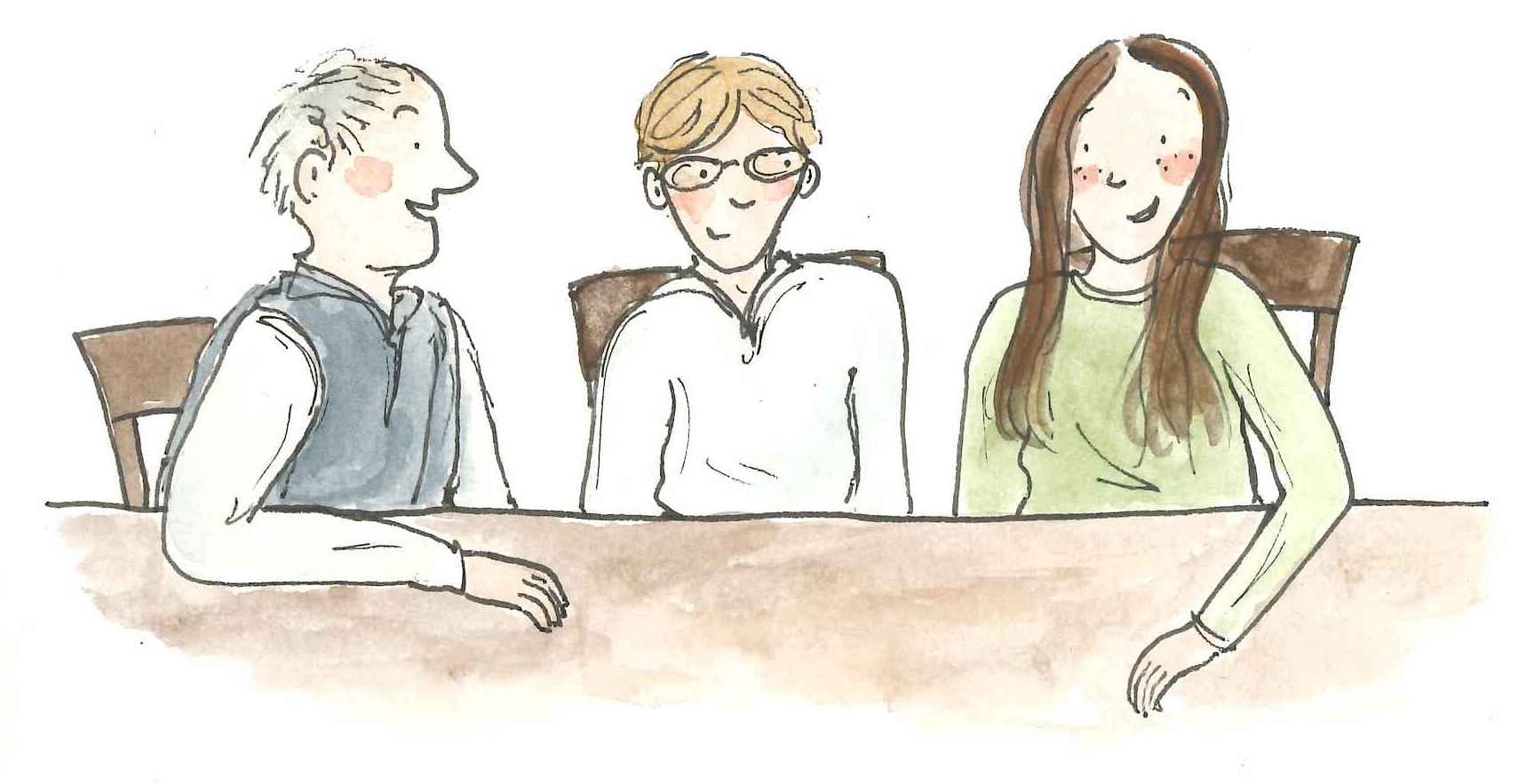 While I was in Italy I went with my aunt and my cousin, who were visiting me, up north to this tiny town called Villa Di Chiavenna to search for distant relatives. It’s around five miles from Switzerland — it’s right in the Alps. The family had no idea that we were coming. I spoke Italian but my aunt and cousin did not. We got up there and we walked into a cafe and I was like, “Hey do you guys know the Sciuchetti family?” A man at the cafe was like, “Not really, but let me ask my friend,” so he called his friend, and his friend came in to the cafe. The friend knew them and said, “Oh yeah, they moved to Piuro, which is the next town over.” So we were like, “OK,” and he said, “They live by the church.”

We hitchhiked back from Chiavenna to the place we were staying. The guy we hitchhiked with knew the family too and said they live in Piuro by the church and across from the pizzeria, so we got one more piece of information. The next day we went to Piuro, walked into the cafe and asked around, but we couldn’t find anyone who knew them. Finally, in the corner of the cafe, we found a family, and they all were like, “Oh my God, yeah. We’ll take you to their house.” So we had five locals walk us to their house. We rang the doorbell and this lady came out and we said, “Hey, uh, we think we’re related to you.” And then the lady recognized my aunt who visited 20 years ago and went “Oh my God,” and welcomed us in. We had coffee and cookies, and they whipped out all these family pictures. They had pictures of my grandpa and even of me as a baby and my parents. I was shocked. They got them from my aunt when she visited apparently.

I was doing a lot of translating. My aunt spoke Spanish, so she could speak Spanish and then the Italians would barely understand her and then speak back in Italian and she’d kind of understand, but it was a lot of translation. And then their son Massimo — he’s like my dad’s generation — came home with his family and he spoke English finally; that was like after two hours. We all went out to dinner and it was really fun. They were just so wonderful and welcoming. The next day I told them that I had to leave to go back to Rome and they met me at the train station. I didn’t know they would be there, I was just showing up to go home and they were there with cookies. It was really sweet. And now I have their address and I wrote them a letter. They had no idea that I was coming, so it was so amazing that they were so welcoming.

We were housed in an apartment building, but many students lived there, and it was on a very lively block with a lot of bars and things. We had a small piano bar in my building itself, like a bar where there’s a piano player in the corner where you can, like, request “Piano Man” and people will sing along. I’m not from Chicago, so I really have no authority to say this, but I had a couple of those moments where I felt like I was out of time, and I thought piano bars died at least 40 years ago. It was not the same guy every time; they worked in shifts. I saw the same person a couple of times, but it was like bartenders; they had them shifted out.

Also, because I was studying Chicago-area bars and restaurants, I felt like when I did those things, I was doing research. What you essentially did in my program is spend a semester writing a research paper at the Newberry, which, as a research library, is known for its primary resource collections. I’m a junior American studies major and, in the library, I found a collection of matchbooks from Chicago bars and restaurants of the 1940s, [and] I did an analysis of them as cultural objects. 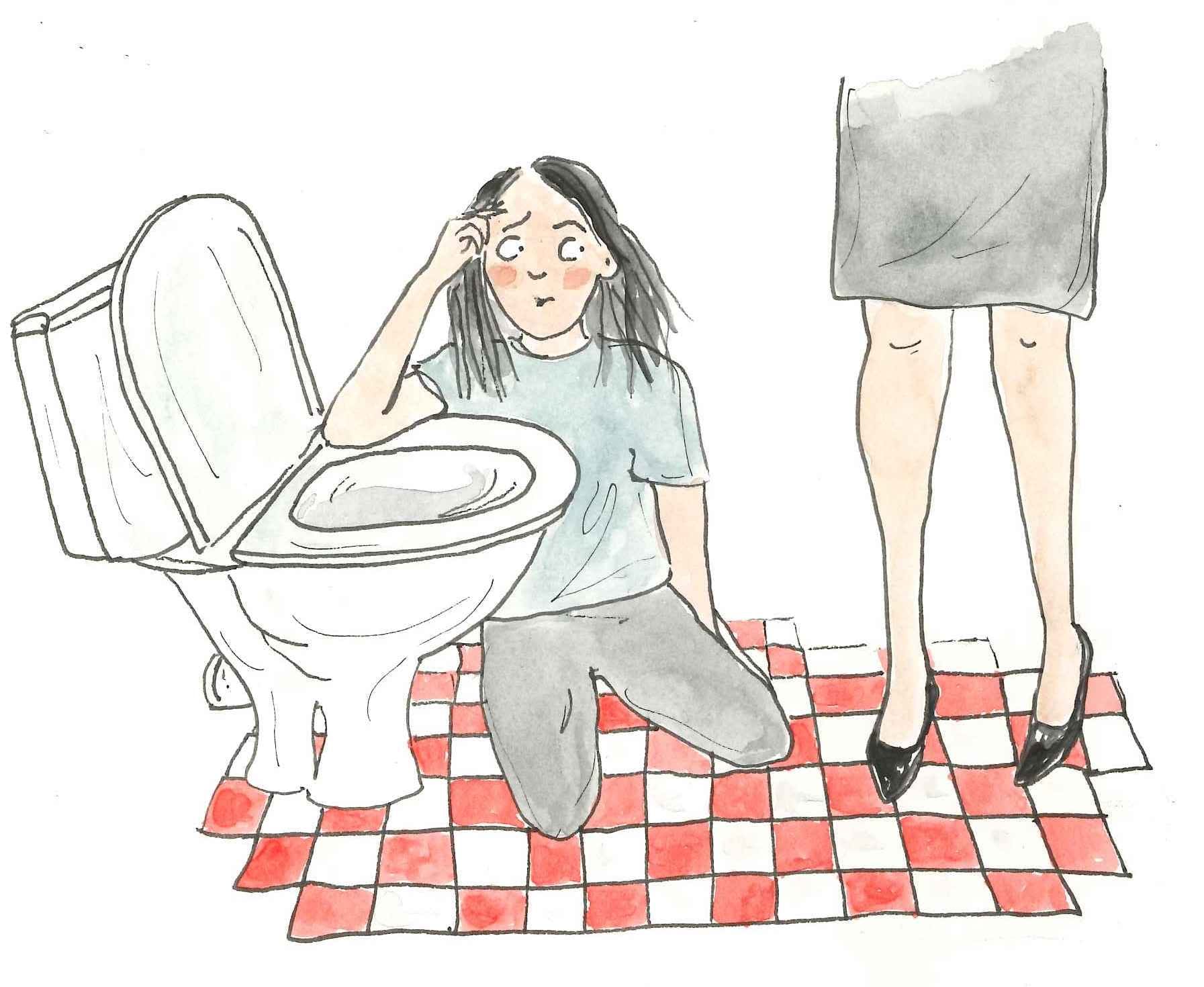 There was a moment when I got really sick. I went to the doctor and he kind of fondled me and was like, “Uh, come back when it’s a more critical issue.” The next day, I started throwing up all morning so I came back and was like, “Dude, you need to diagnose me,” and he was like, “You know what, I think you have something wrong with your small intestine. You should just eat rice and soup, nothing else, ever — and drink water.” And I was like “OK.”

But when I got back home, I was still sick again. I was just kind of throwing up all the time and my host mom came and she was very nice. She was very good to me, but at some point in the conversation, while I was throwing up, she said, “You know, you’re a very smart girl, so it’s a good thing if you miss class because you’ll be able to catch up. I know you’re bright.” And I said, “Thank you.” Then she said, “Not like Jewish people, they’ve got something inherently wrong with them.” And I was like, “What?” And she said, “I don’t know, it’s something about their race that makes them more inferior to others.” I was just like, “I’m sick and trying to process that you’re being racist.” It kind of tainted my experience but I thought of it in an anthropological lens trying to understand where these people are coming from or what the difference was.

My program got to Utrecht in the Netherlands on the 24th of August, and we stayed at this hostel. The first morning after we got there, a good friend of mine woke up with all of these bites all over her body. She immediately thought mosquitos, because it was in the middle of the summer. It could’ve been anything — we weren’t too worried about it — but a few days later other people in their room started getting them. They found bed bugs, so they did their laundry, sprayed something around their room, and thought they were done with it, but a couple days later, we were sitting at an academic conference — it was super official, we were the youngest people there — and another one of my friends found a bed bug between the pages of their notebook.

At this point, everyone’s freaking out. A group of people skipped the presentation, went back, and tried to sort it out. Eventually, they moved out to a corporate hostel two blocks away, called StayOk. StayOk is a lot more expensive and all over the country — it’s basically a hotel. The bed bugs moved up to my room, and they moved around to another room. I wasn’t getting bites, or at least I wasn’t reacting to them. The hostel owners did everything they could in the moment, but the reality is if you have an infestation of this size, you’re gonna have to treat the entire building. And the building, which has a long history of affiliation with anarchist activists, was pretty big. It would’ve been 100,000 euros to do it, and I can’t imagine an anarchist collective has a reserve of 100,000 euros. So we just kind of got comfortable and waded in. It was a big mess. I’m pretty sure our TA for that program said she’s getting a bed bug tattooed on her arm. 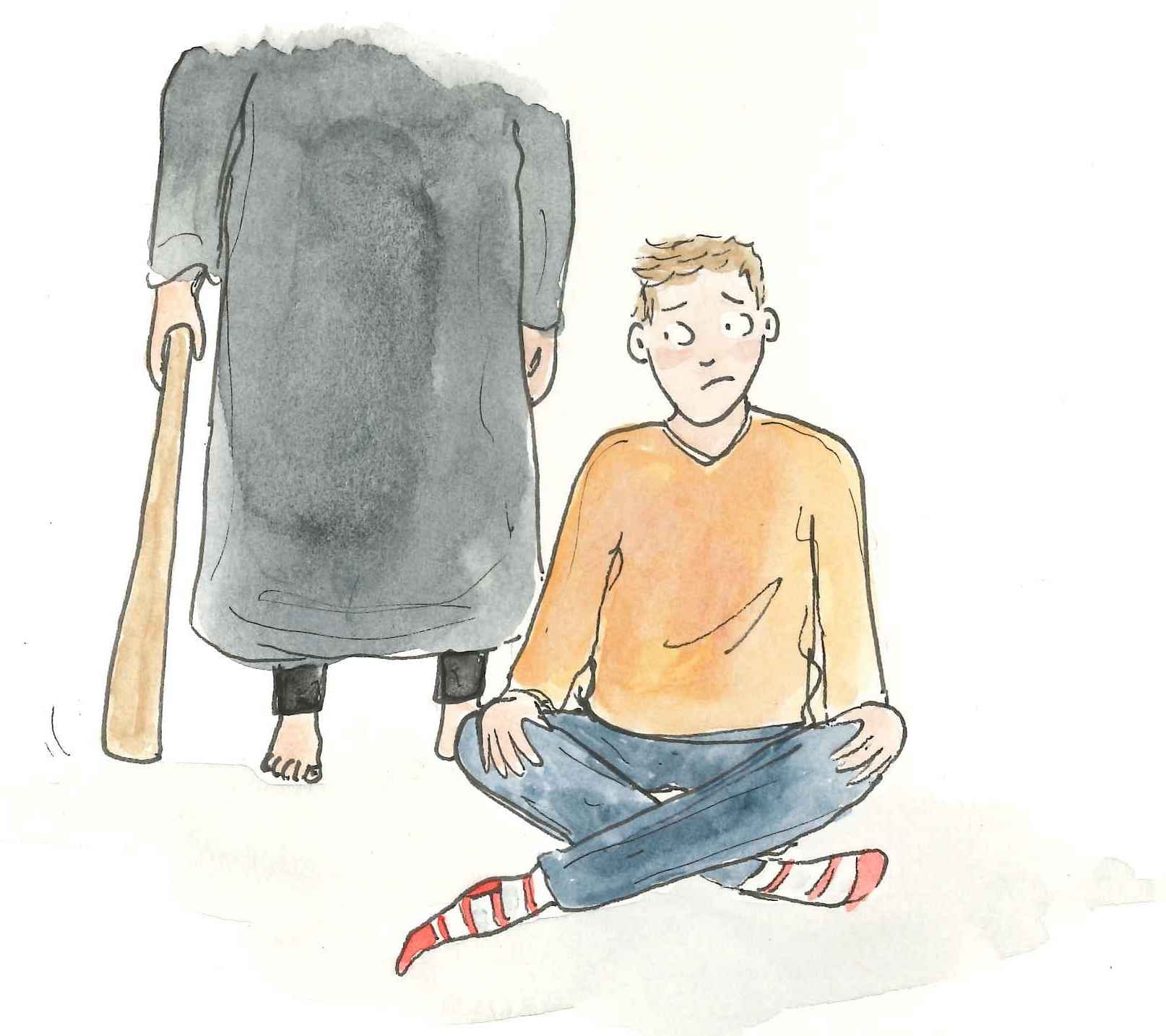 We were learning Zen Buddhism from a man who had been in a Zen monastery and he introduced this thing that they do in the monastic community where they have a large stick — it’s kind of like a bat but a little bit flattened. At first, he used it to straighten our backs, like if we weren’t sitting correctly he would put it against our backs so that we would be more aligned. But then, the second week we were practicing Zen, he introduced this thing where, if you’re falling asleep or you’re not holding your posture, they just hit you with it, basically. Its intended purpose is to bring you back exactly into that moment because that’s what you’re supposed to do in Zen: live aggressively in the moment. So, I remember sitting in the Japanese temple in India and it was the first time he started hitting us, and when you’re practicing Zen you can only look straight forward and sort of down, so I was aware that it was happening, because in my periphery, I could see him moving closer to me, and then you just hear it. It’s extremely loud. It’s this really loud smack that echoes through this giant temple that we were in, with super high ceilings.

Of course, it was voluntary. You’d put your hands together and then you’d lean forward and then he’d hit you on your shoulder, but I didn’t know that. I started getting sick to my stomach because I could just hear it getting closer every time someone got hit. I would physically jump when I would hear it. After being introduced to the sound, that became the object of my focus, and so it kind of magnified this anxiety about it. Ultimately, I misunderstood it. I thought he was just hitting people the first time, so he walked past me and I was jumping every time it happened and I was feeling sick. I was feeling queasy, and I was just super anxious, and in all of this I’m thinking the way to get out of it is to sit up as straight as possible. So, I’ve got the best posture anyone’s ever had — I’m just so terrified — and then he just like walked by me. I was super relieved, but after that, every time he hit somebody else, I still jumped, even though I knew it had passed me. 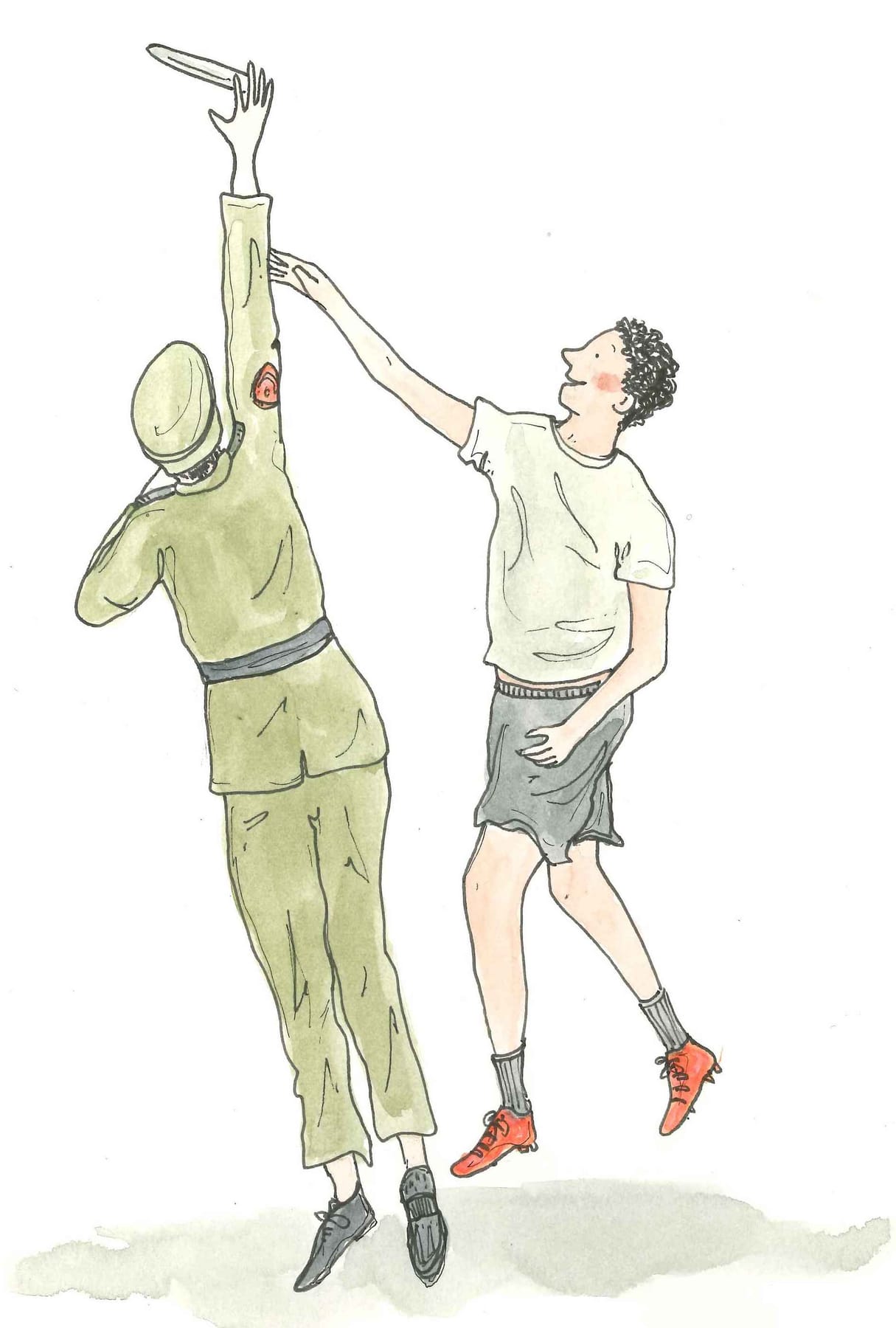 I signed up for an ultimate tournament in Fuzhou. We lost almost every single game. It was like one of those things where you know you are getting your ass kicked to the point that you don’t really care anymore. It got to the point where we’d score one point and go ballistic like we had won the Super Bowl. We would run out to celebrate with each other and just go wild whenever anything relatively good happened, and the security guards — in China there are security guards everywhere — were on the sidelines watching us.

We were celebrating so much that they walked over because they thought there was like a situation going on. They were watching us run around chasing plastic, and then a disc lands next to one of them and he picks it up and runs it over and we’re like, “No, no, no, throw it,” and so he threw it directly into the ground. I threw it back to him and said, in Chinese, “Do you want to play with us?” He said OK, and so we tossed for like a solid 15 minutes. He told me his name, and then his boss ran over and told him to cut it out, so he thanked us and ran off.