What is the foundation of a college’s culture? There are its histories and traditions, its sites and demographics. There is its vocabulary — made up of words like “Bullseye” and “the Krud” that are meaningless to outsiders.

And then there are its memes.

In the past year, Facebook groups dedicated to the sharing of humorous online content, otherwise known as memes, related to a certain college have taken the country by storm.

These groups, whose names typically follow the formula of “[college name] Memes for [college-related adjective] Teens,” are now hubs of college-specific punchlines. Some, like University of California Berkeley’s “UC Berkeley Memes for Edgy Teens,” even have more members than the total enrollment of their respective colleges. Kenyon’s version of this trend was founded last spring and has since seen a meteoric rise. With over 1,100 followers, the Facebook page “Kenyon Memes for Philandering Teens” occupies an important role in the digital world of Kenyon: It centralizes its memes.

“Memes about Kenyon are nothing new, but they would often live a brief life in a GroupMe chat or an email chain and then disappear forever,” the administrators of the page, who insisted on remaining anonymous, said in a Facebook message to the Collegian. “With a page like this, it’s all concentrated in one easily accessible place,” they said.

Content posted to the page tends to combine familiar images with Kenyon inside jokes. For instance, there is an image of someone selecting the “Price: High to Low” search feature on a shopping website with the caption “What made you choose Kenyon College?” There is a picture of a glass decanter with President Sean Decatur’s face on it. Above, text reads “Sean Decanter.” 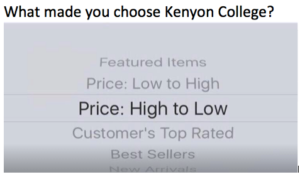 An important aspect of a college’s memes is their specificity. Often the memes are so esoteric that they make little to no sense to anyone not affiliated with the college. On Kenyon’s page, there are memes poking fun at the College’s stereotypes, Mather Residence Hall and the 2020 Plan; and, of course, there are the occasional nods toward the ever-present Graham Gund ’63 H’81.

For some, the idiosyncrasy of these memes makes them an integral part of Kenyon’s culture. With all their references and jargon, they not only represent Kenyon’s conscience and agenda but also represent its humor. In the past, students have used memes to protest changes in the K-Card policy and the lack of convenient parking spaces.

“Memes, weirdly enough, have become an important medium for people in our age cluster to express deep seated feelings in a sometimes whimsical, sometimes nihilistic way,” the page administrators said.

And for those who are new to this community, the snapshot of life at the college that the page provides can be an important tool.

“I heard first years talking about [the page],” Maggie Perkins ’20 said. “It’s a really great way for them to get acclimated to Kenyon culture.”

Most college meme-sharing platforms are Facebook groups, but the administrators of Kenyon Memes for Philandering Teens chose to make it a page. This move was, in part, an effort to preserve the anonymity of its contributors. “On some level, given the size of the school, we all crave anonymity,” they said.

As to their own identity, they told the Collegian they are a group of sophomore, junior and senior students that takes turns running the page in teams of two to three. “We’re friends, Romans, countrymen, etc,” they added.

“Kenyon Memes for Philandering Teens” rose to popularity this past summer. The combination of a few widely liked posts and a “meme war” with nearby Oberlin College’s own Facebook meme group, “Oberlin Consortium of Memes for Discourse-ready Teens,” garnered it a lot of publicity. The war saw Kenyon and Oberlin trading insults in the form of memes and ended in “something along the lines of an uneasy truce,” according to Oberlin group founder and current sophomore Theo McGuire. It peaked in late May, when several Oberlin students traveled to Kenyon and spray-painted a large rock outside Leonard Hall — colloquially known as the Beta Rock — with Oberlin’s school colors and the words “OC Teens” in a heart.

“They’re still making memes about us to this day,” said the Kenyon page’s administrators. “For a school that pretends not to care about us, I’d say we got inside their heads.”

McGuire, who referred to the war as “a notable blip in the [Oberlin] meme page archive,” had some insight into the draw of college meme pages. “That niche quality is a big part of the appeal,” he said. “There’s a weird sense of camaraderie in being able to have a living collection of memes that are so specific to aspects of life at a given college.”

Josh Walmer ’18, a fan of the page, reflected on its importance. “It might be the closest replacement that the digital age gives us to the unifying aspect of old Kenyon traditions,” he said, before adding, “Also, so much better than the Oberlin page.” 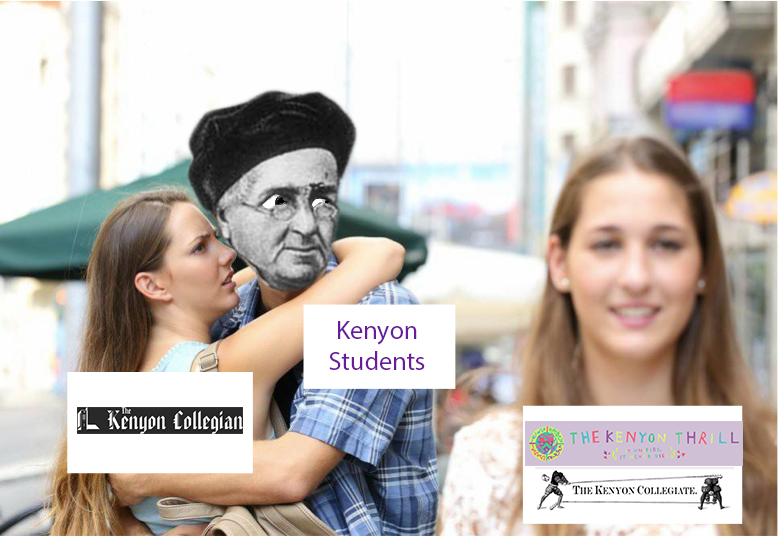