The first bird the Introduction to Experimental Biology class caught that morning was a small gray sparrow, called a junco, whose body, tangled in the net, looked like a fly stuck in a spiderweb. Capturing the wild bird was easier than this reporter had expected — the net had been raised for barely five minutes when the junco flew into it. But getting the bird out was another matter. Visiting Assistant Professor of Biology Elizabeth Schultz guided Sarah McPeek ’19 through the process.

“Bind the legs together at the joint,” Schultz  said. “Juncos have really gangly legs. You have to be careful.” 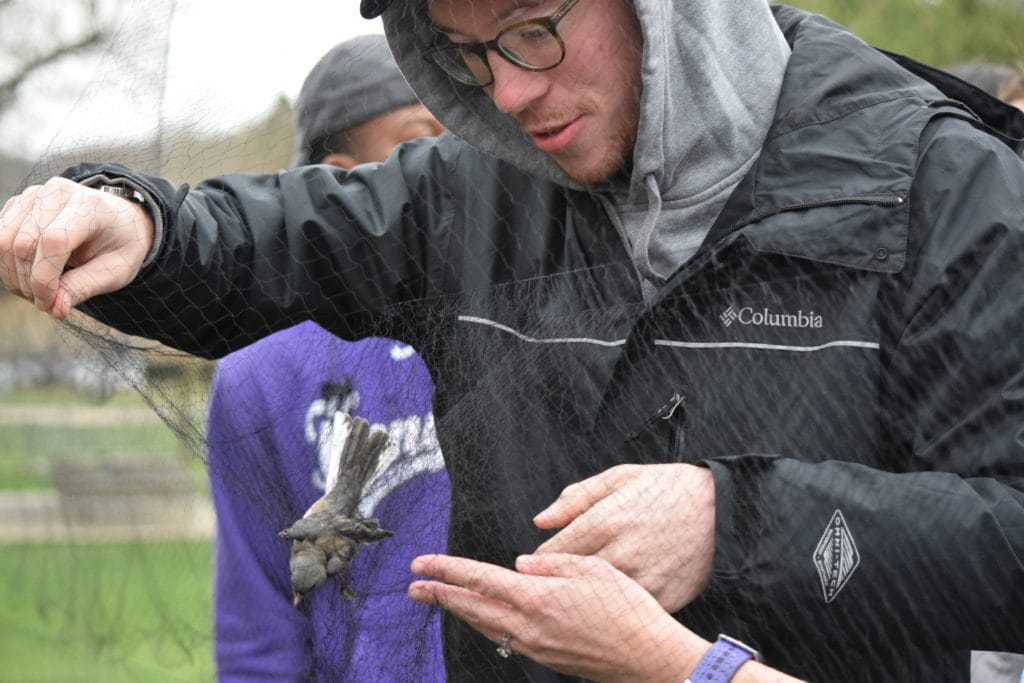 Every section of Biology 110 — the introductory biology lab that is mandatory for the major and minor — involves a research component based on the instructor’s own research interests. This spring, Schultz, who specializes in the environment’s impact on bird physiology, is introducing the class to her field.

The students spent the first part of the semester learning research methods and developing their own research questions. Later, they will implement those projects, but for now they are in the data collection phase of the course. For Schultz’s class, this means early morning trips to the Brown Family Environmental Center (BFEC) to capture and draw blood samples from birds in the wild.

It was 8 a.m. on Thursday, March 30, the second time the class gathered at the BFEC. The students were bundled up in coats and sweatshirts. Only Schultz, who entered wearing a short-sleeved shirt, seemed wide awake and oblivious to the cold.

“We caught eight yesterday,” she told the class. 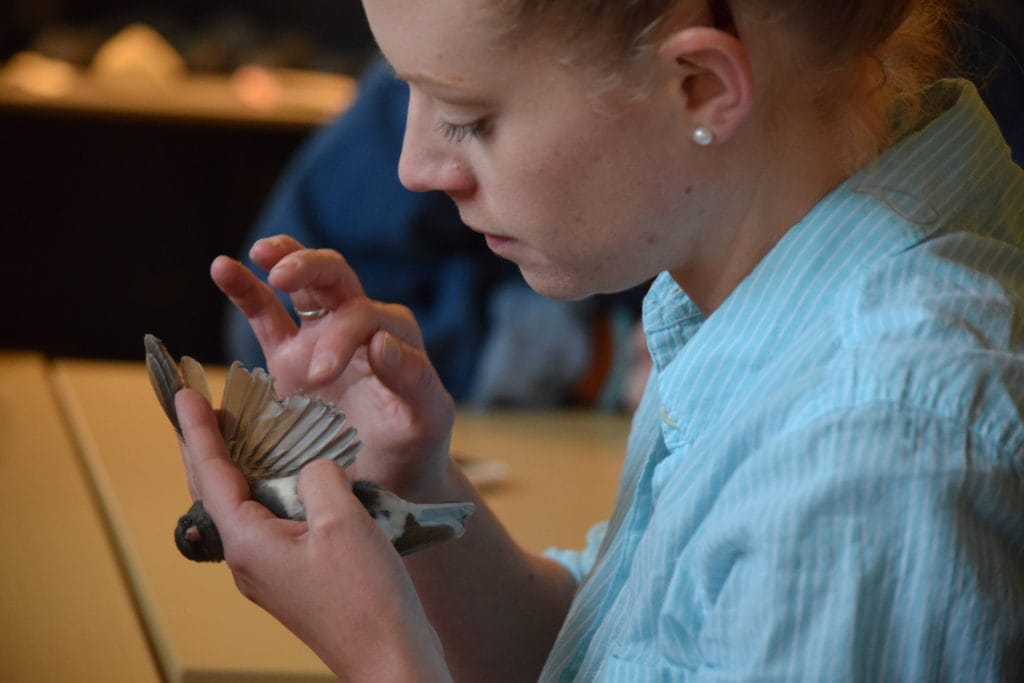 The students worked together to secure a fine black net to poles on the lawn outside the BFEC building. Untangling the net was a slow process; even fingers can get caught in it. The class set it up in the birds’ typical flight path, between the birdfeeders on the lawn and a grove of trees.

“Sometimes we’ll all go around and run and scare them at the same time,” AJ Gourrier ’19 said.

After the net was up, everyone went inside, where the students chatted among themselves. Some finished eating pastries they had brought. Then, someone noticed the junco in the net, thrashing around like a fish.

In her past research, Schultz usually studied a single species. For her dissertation at the Univesity of California at Davis, she worked exclusively on the red crossbill, a type of finch. The Biology 110 class is studying whatever bird species they can get ahold of. The last time the class set up the nets, they caught bluejays and woodpeckers, Schultz said. On this particular day, the class mainly caught juncos — five in total, before it started to rain at around 9:30.

“Juncos are flocking right now because they’re getting ready to migrate,” McPeek said.

When McPeek freed the bird, Schultz took ahold of it by pinching its neck between the index and middle finger and cupping its body in her palm. (This is a hold called the Vander’s grip.) She carried the bird inside and kept it in her left hand while taking notes with her right. She lifted the wing to find a vein, then drew blood with a needle.

“There’s a sweet spot where you’re actually poking,” she said. “It’s a little uncomfortable for the bird but not really painful.”

She filled two small tubes of blood. For bigger birds, Schultz told the class, she can fill four, five or even six tubes. After taking blood samples, she put the bird in a brown cloth bag for half an hour to stress it out. Before releasing the bird, the class would take blood samples again. This allows the students to analyze the change in stress hormones in the blood. That data will form the basis of their projects.

While this was happening, Jeremy Moore ’19 and McPeek discovered a red-headed woodpecker in the net, its long tongue caught in the string. (Woodpeckers have barbed tongues that allow them to cut into bark.) It struggled and issued warning calls while the students tried to free it.

“You are using my hand as a stress ball!” McPeek told it when it dug its talons into her fingers.

When they finally untangled the bird, people cheered. 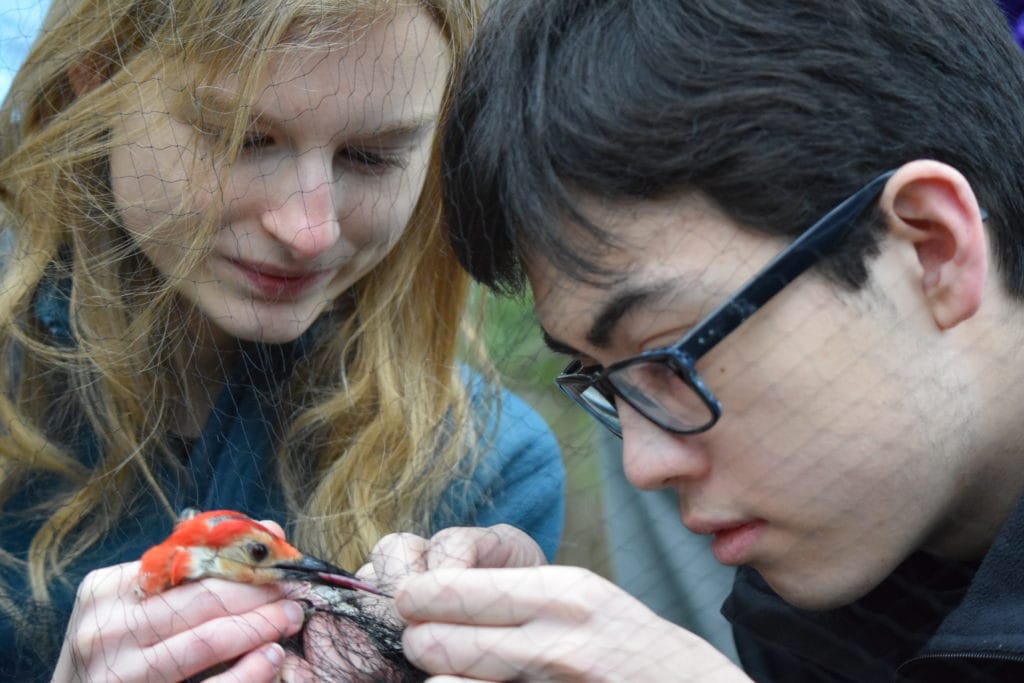 Later in the semester, some students will study the relationship between testosterone and immune function; others will examine how stress affects immune function, among other projects, which the students have designed in order to familiarize themselves with research methods.

For now, they finished up their pastries. Through the window, they could see birds gather on feeders outside.