Quotes have been edited for length and clarity. Illustrations by Anna Zinanti. 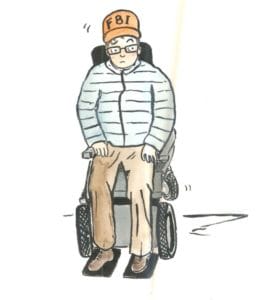 This must have been seventh or eighth grade. My parents decided that we were going to take a weekend and go down to one of the Amish country areas in rural Ohio, so we did. There are places you can shop and whatnot. Being there is a surreal experience because nobody makes eye contact with you. I thought that was just a stereotype before I got there. I thought, ‘They can’t be that aloof,’ but it was like a parting of the Red Sea kinda thing. So we’re window-shopping for Amish merchandise and I decide that, screw it, I’m hot and I’m going to buy stuff anyway, so I may as well buy a hat. Now, there weren’t any straw hats or stereotypically Amish-looking hats. No, just straight baseball caps; there was a religious cap section and a Confederate flag section. I wasn’t super down for either of them, but I’m more down with the religious stuff than the Confederate flag stuff, so I picked the least stupid-looking one. It said “FBI: Firm Believer in Jesus,” which is just not how acronyms work. It’s funny for a couple of minutes and then I stop thinking about it. But soon, Amish people start coming up to me and my family saying ‘Your son is such an inspiration!’ and stuff like that. They’re kneeling down and getting in my face. I’m used to regular, able-bodied people having weird reactions to me, but this is definitely hat-specific. I would go down one street with the cap and gauge their reaction, duck into a store for a few minutes, and take it off again. It was like switching off a light. I don’t want to be condescending, but literally wearing a hat changed their entire view of me as a person. I became Amish Pope just because I wore that baseball cap.

…I lived in a commune and babysat near bombs.

After high school, I wasn’t quite sure whether I wanted to go to college. One thing I was really interested in exploring were the ways you can organize a society; I was just really keen to see what anarchism looked like in reality. A Kibbutz [an Israeli agricultural commune] is probably the closest thing you can get to that today. The place I went to was called Kibbutz Neot Semedar in the south of Israel. It was in the middle of the desert, absolutely nothing around it. It’s kind of a cult. There are online reviews saying ‘Hey don’t go there, get out as soon as you can.’ Really, they were trying to create a place where you could really explore the limits of human cooperation by getting rid of hierarchies and private property and sharing everything. Every single morning you’d get up when the sun rises, about 5 a.m., and then you would meditate, drinking tea. I spent about five months there. It’s almost like [Plato’s] Republic in that there’s no nuclear family. All the people go out to work, and there’d be volunteers who’d take care of all the children together. So it was my turn to do that. The one thing that no one ever told us was that right next to the Kibbutz was a military base with tanks. They had rockets, and they had bombs. But nobody ever told us this, so my friend and I who arrived together, we were looking after these small children, and then we started hearing these bombs. And so we flocked to the ground. The windows were moving, we were really freaked out. But the thing was, these little children were going about their day as though nothing was happening. We were really freaking out, and the children were just being absolutely nonchalant. It was just really shocking how military life and security and threats and scares were just built into everything. I learned a lot about the Israeli-Palestinian conflict there. It was actually because of my time spent there that I got involved in Students for Justice in Palestine on campus. 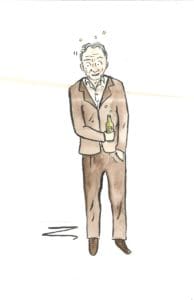 …Robert DeNiro thought I was great.

I was in Aspen, Colorado because I was performing in the Aspen Ideas Festival, which is essentially a small gathering of famous people and artists to talk about ideas. It’s a scholastic thing. They invited me to come perform there with some of the national student poets and some students from Louder Than A Bomb, which is a Chicago poetry group. So we’re at this brunch banquet kinda thing, and a bunch of people from the festival were there. Lil Buck was there, and some wealthy people from really sketchy companies like Monsanto were there. Actually they sponsored it, which is weird. So we get up on the stage and perform a group poem and individual poems, and then we got to mingle with the crowds. And then, off in the distance, I see Robert DeNiro, and you know I have to meet Robert DeNiro. I walk up to him, and put my hand on his back and play it cool and say something like ‘Yo, you’re Robert DeNiro” while inwardly freaking out. He smells like alcohol because, you know, it’s Robert DeNiro. In my mind he was wearing a brown linen suit, but that’s probably just the idealized version of Robert DeNiro that I have in my head. He just puts his hand on my shoulder, pats me, and says, ‘You were great, kid,’ and then turns back. So yeah. That’s the time I met Robert DeNiro. He called me kid, which is a very Robert DeNiro thing to do.”

…I stayed the night with Omani nomad camel racers.

It was our fourth year in Abu Dhabi, and our family friend’s camping group was going on this big trip. Every week, we’d go for a weekend, but this time we decided to go for  a whole week of camping. We hit Oman, Jordan — all these places. Right at the beginning, we get to the border between Abu Dhabi and Oman and my dad realizes he forgot all of our passports, so we had to split off from the group and meet up later. By the time we got back to the border, it was really late, so we were driving in the desert without our group and it was super late, and we knew we’d have to camp somewhere, but we didn’t know where. Then out of the blue we just see these lights coming towards us and they’re honking at us. We thought “Oh god, we’re in trouble. Somebody had to come out here to get us,” but it turned out to be these Omani nomads who were just in the in the area. They had seen our lights and invited us to their tent to hang out with them. They had really great food: rice, lentils, meat, everything. They even made us bread out of their camel milk, and that was amazing. My brother Sammy decided to drink the camel milk fresh from the camel and got sick afterward. Turns out, the reason they had all these camels on hand was because they raced camels all around the United Arab Emirates. They had all these stories about competitions they won and they brought out their golden sword, which is a prize you can get. It’s either that or a lot of money, but most people go for the sword. We even got to see their little robots that they use to whip the camels during races. They didn’t speak English, and we didn’t speak Arabic, but it was still a really fun experience to try and get each other to understand. We even slept in their tent. At first we tried to just go off and sleep in our own car, but they were like, ‘No, no, no, stay in here,’ and so the next morning we woke up and went to their camel race.

…I made rainbow cupcakes to come out to my parents.

I decided, after my freshman year of college, that I was just really not into men. I was like, okay, I should come out to my parents this summer. I concocted this idea to make cupcakes that were rainbow — I separated all the different food colors into six different bowls. It was this whole thing. I did this because I wanted it to be a thing that I had to do, because if I make cupcakes and they go stale, you know, I can’t let that happen. So I made the cupcakes. Which I called ‘cupgaykes’ by the way. My parents are divorced, so I transported them from house to house, and as would happen, there was this whole fiasco. My relatives showed up at our door unexpected and just stayed until 10 p.m., and then my mom was like, ‘Ok, I’m going to bed,’ and I was like, ‘No! Don’t.’ So then I awkwardly went up to her room. She and my stepdad were curled in bed and stuff and then I was like, ‘Hey, just so you know,’ and I put the cupcakes down. I also had a sheet of paper that was full of baking puns and gay puns combined into one. Like ‘coming out of the oven.’ I presented it to my mom, and she was like, ‘I don’t know why you felt like you had to make cupcakes for this. Also, I had too many carbs today, I’m not going to eat one.’ And then I took the cupcakes to my dad’s house, and another fiasco ensued, because I wanted to do both my dad and my stepmom at the same time, but my stepmom was on this girls’ night out that I didn’t know about, and then my dad was about to go to bed, so I said, ‘Don’t do that yet, I need to tell you something,’ being really sketchy. He was like ‘What?’ And I said, ‘Well, let’s wait until Cheryl gets home.’ I called her and she was clearly drunk. She said, “Yeah, I won’t be back for a while,” and my dad really needed to sleep, so I said, “All right, well, sit down.” And he was like, ‘Oh my god, what.’ And then I brought the cupcakes out and he was like, phew. He thought I was pregnant or something. So that was a relief for him. I remember when I told my stepmom, the next day, she just kind of threw her arms up triumphantly, like, “I knew it,’ because I think she did, in fact, know. And then I kind of just had to keep doing it for all my siblings, too, with the same cupcakes, the same note. My little brother thought it was a joke. And I was like, ‘Haha. No.’

Sammy got sick because he drank raw milk. His digestive system is not used to it. Had he drunk pasteurized camel milk, he would have been fine.