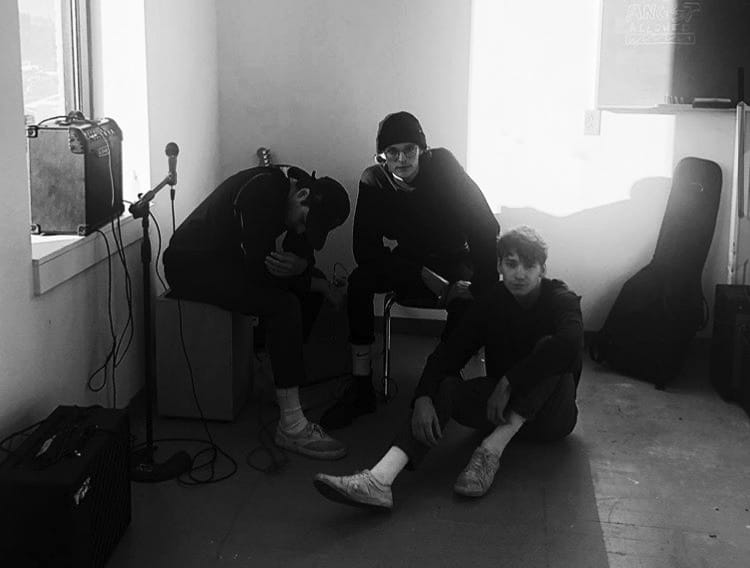 While waiting outside the Horn Gallery practice room last Friday night, one could hear the murmur of nervous voices and the strumming of an electric guitar. Inside the room stood four college-aged men in floral shirts and beanies practicing a song. Most passersby might have mistaken them for Kenyon students practicing or just another band visiting the Horn for the night, but they were actually Columbiana, a band made up of four local Mount Vernon Nazarene University (MVNU) students.

“We’re pretty nervous,” Joshua Long admitted before their show began. They were about to open for New York City band Free Basement at the Horn, the first show for Columbiana in a formal venue. A senior at MVNU— or “the Naz,” as it’s known colloquially—Long plays the lead guitar, co-writes songs and sings lead vocals for Columbiana.

Despite all of its members attending MVNU, the band actually got their start at Kenyon. “We only got together three months ago,” Long said. Long and Carsen Pirnstill, who co-writes, sings backup vocals and plays rhythm guitar for the band, were visiting a North Campus Apartment (NCA) hosting live music by Mile$ (Miles Shebar ’20) and Hoolian (Julian Shaw ’20). They were both struck by the amount of support and the inviting atmosphere coming from the house show.

“We went to [the] NCA, and we were like, ‘Dude! We can play one of these!’” Long said. “So at first it was me and Carsen, because we’ve been playing music together for like two years. And then we played at [the NCA]. And now everyone comes up to us and they [are] like, ‘you’re the Naz band!’”

Even after their show at the NCA, Long and Pirnstill didn’t feel as though they were a real band yet. It wasn’t until, at a different Horn show a few weeks ago, they were approached by Dora Segall ’20, the Horn manager, that they realized they could start something together.

“[Carsen and I] were at the Neighbor Lady show at the Horn, and Dora Segall came up to us and was like ‘oh are you guys the band from Mount Vernon?’ and we kind of frantically looked at each other, and I was just like ‘Yeah!’ So then we started a band,” Long said. “We weren’t officially a band until that moment,” added Pirnstill. Since then, the band has been practicing consistently and have added a drummer, Jared Wolfert, and a bassist, Lock Troth. They played at the PEEPS Halloween party and a few other intimate shows, but the Horn show was by far their biggest gig yet. The four got to know each other as art and graphic design majors. “We spent a lot of time in the same art building, and just got to know each other through talking. We figured, we all played music so why not start a band,” Long said. Although the four of them met at MVNU, they all hail from different parts of Ohio. Columbiana, in fact, is the name of Long’s hometown in Ma-honing County. Wolfert, the drummer, is from Cleveland and Pirnstill is from the Columbus area. The band said they were pleasantly surprised by Kenyon students’ general attitudes towards MVNU students. “There’s a lot of preconceived notions that the Naz kids have about Kenyon,” Long said. “And that [notion] is that they all think that they’re way better than us, the Naz kids. And I guess that was my interpretation coming here, so I’m like, ‘okay, I gotta put on my favorite outfit, and talk really cool.’ But the more and more we started coming here, people are a lot nicer. It’s really open.” “As outsiders,” Pirnstill said, “we’re able to implement ourselves into all these different groups, and all these different friends, which I think is su-per nice.” The show itself was fantastic, not only because Columbiana sounded great, but because the audience was made up of MVNU students as well as Kenyon students. Together, they swayed to Columbiana’s jangley sound and mingled outside over cigarettes. “We’re right here. But we never meet,” he said about the two schools. He paused for a moment, looking for an explanation. “Maybe it’s because everyone at Kenyon is from New York and can’t drive.”

That's wats up. Heard these cats can bring a hammer down. I'll be digging into their stuff from out here in southern CA.