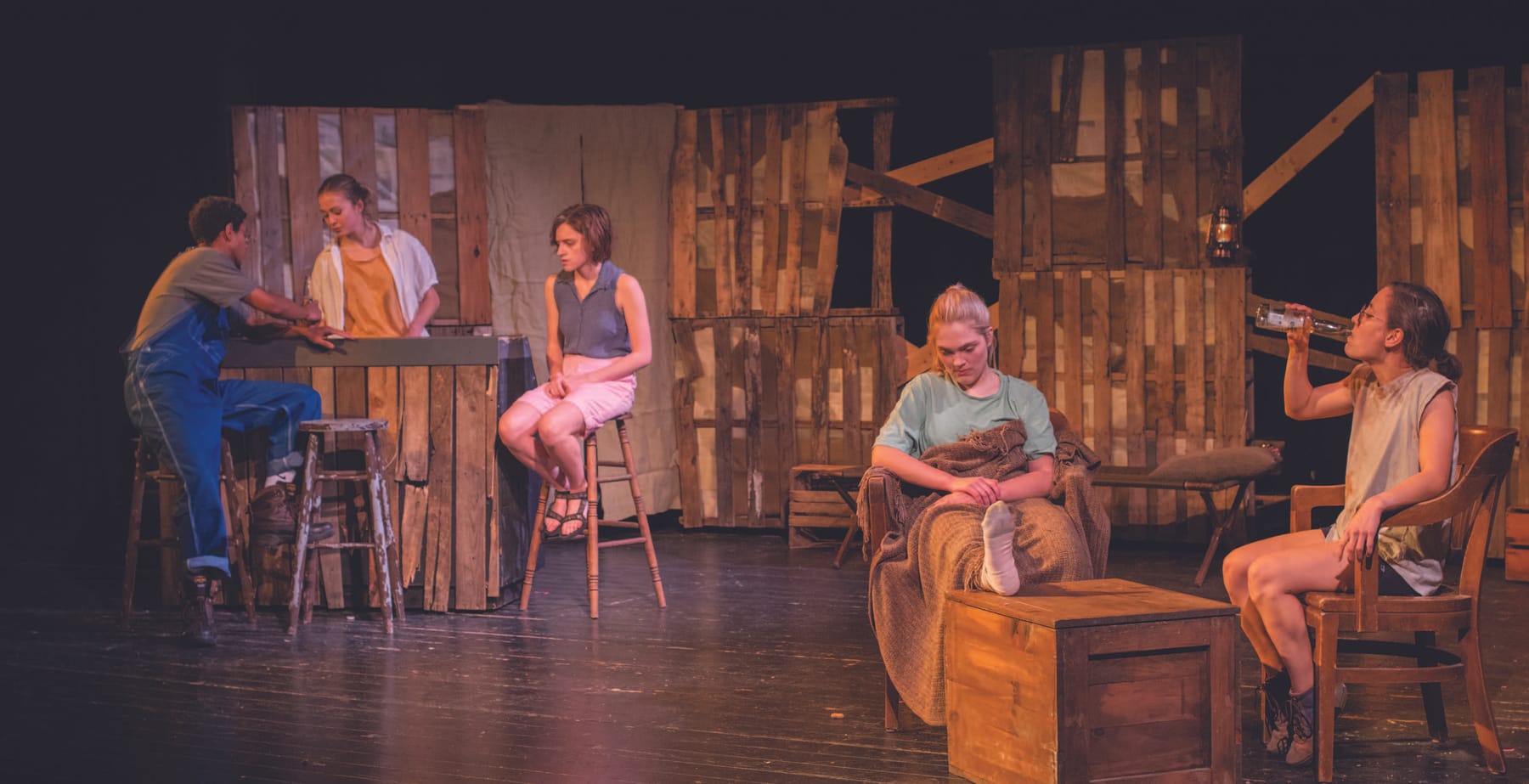 Mackenna Goodrich’s ’20 senior thesis show “Bottle Fly” had somehow already begun before the lights came on: Olivia Marr ’20, who played K, lay discreetly in the cot center stage, twisting in her light wool blanket. This was certainly the calm before the storm and the last time the stage would be free of tension.

Once the play commenced, the simple, wooden, rodeo-esque set came to life with Rosie—played by Claire McPartland ’20—swatting at bees as she sprinted on stage. Then, one-by-one, the members of the household are introduced: Rosie, who had rescued K and adopted her into

the family; her partner Cal (Edward Moreta Jr. ’22); Ruth (Katherine Reber ’21); and Ruth’s beekeeper girlfriend Penny (Emily Blanquera ’20). On the surface, “Bottle Fly” is a play centered around con-flict within a family in a de-crepit house in the South. The main source of tension comes from the relationship between Rosie and Ruth. Throughout, Rosie constantly guilts Ruth over the seemingly minor in-conveniences that she causes while living in her house. The many implications concern-ing intersectionality ultimate-ly create a thought-provoking melting pot of a story. Go-odrich comments that while this show includes a narrative about people below the poverty line, “it’s also an opportunity for people whose identities aren’t normally on the Kenyon stage to be up there. We [at Ke-nyon] have students of color, LGBTQ+ students and low-in-come students, so it’s valuable to share stories about people like them as well.” Set in modern-day Florida, the characters are not those stereotypically depicted as liv-ing in the rural South. In an in-terview with Deb Miller from DC Metro Theater Arts, “Bot-tle Fly” playwright Jacqueline Goldfinger said that she want-ed to “bring a different story to the Deep South.” Not only is this representation important for the sake of society, but, on a smaller scale, it is essential for Kenyon students to witness. Lighting Design Assistant Zola Gray ’23 said that “part of the author’s intention was to show dynamics as they exist in the Everglades in Florida today, a rural experience that most Ke-nyon students have not been exposed to. In that regard, I think it was important for Ke-nyon students to see.” The diverse audience that came to the Saturday night showing was coincidentally similar to the dynamic of gen-erations in “Bottle Fly.” Ac-cording to Goodrich, “the second night of the show, the audience was actually about half Kenyon students and half people 40 and over.” This play is about the intermingling of those from vastly different ages, and middle-aged or older characters having to negotiate with those of younger genera-tions. The play’s impassioned di-rection comes from Goodrich’s personal connection to the content of “Bottle Fly.” “It was really special doing my thesis with Claire and Ol-ivia because they’re two of my best friends and greatest col-laborators,” Goodrich said. “I really connect with this play as a person, especially with the character Penny, so it was exciting to tell a story that I could so relate to.” With its representation, intriguing plot and talented actors, “Bottle Fly” presented the audience of the Hill Theater with a new perspective.