Last Thursday between 11:10 a.m. and noon, those walking along Middle Path might have been puzzled by some unique performances. Six students– Gabrielle Bing ’19, Mackenna Goodrich ’20, Naomi Lofchie ’20, Gabriela Marx ’21, Isa Mojares ’20 and Blake Peck ’20– were using the benches, walls and steps of Kenyon College as their dance stage.

The performances were part of The Choreographer II Dance 228, a dance choreography class taught by Assistant Professor of Dance Kora Radella. The six students paired up with each other, and the partners had the responsibility to choreograph each other’s dances. Most importantly, each piece had to be performed at a specific public site along Middle Path between Gund Gallery and Ascension Hall. Site-specific dancing engages the areas on campus with its students. Through dancing at different locations, students create a dialogue between a space and its inhabitants.

Students danced at a variety of public sites. Three students danced along the wall surrounding the now-demolished Olin and Chalmers Memorial Library. One student danced on a bench. Another danced on the steps of Library Building B. Onlookers, en route to Pierce Hall or their next class, watched in pleasant confusion as the dancers leapt, jumped and skipped through public space.

The six students dancing were not just improvising their moves. There was a lot of thought, planning and deliberate preparation behind each piece, according to Bing. “We wrote proposals for every dance,” she said. “We had to think of specific concepts, interpretations and sites for our dances to be approved.”

The dancers in Radella’s class sought to use dance as a way to unpack the meaning of certain spaces around campus.

Bing’s piece was performed by Mojares along the backside of the wall. She chose the wall as her site because of her interest in the interaction between walls and bodies.

“Foucault talks a lot about how the spaces that we’re in do the job of policing. With walls, you don’t need an actual human to police someone because they feel like they’re already being watched,” Bing said. “I wanted to question what happens when the job of the wall becomes the job of the human, and vice-versa. Through dance, [Mojares] is helping the wall do its job, and she is also embodying the wall.”

Mojares’ piece, on the other hand, was set on a bench on Middle Path. She wanted to explore the relationship between the public and private environment. In an interpretive style, Bing would touch, feel and lie across the bench, every now and then speaking the same three phrases: “Did you do the reading?”; “You didn’t text me back”; and “Does it look like I’ve been crying?”

The piece was designed to unpack the collective experiences that occur on these benches, according to Mojares. “These benches are on Middle Path and nearly everyone in the student body has sat down there and had a conversation or has walked past and overheard someone’s conversation,” she said. “All the things– exciting, sad, scary, emotional – [that] happen on these benches and these moments can be somewhat universal.”

No matter the underlying meaning, students were captivated. They stopped to watch; some took photos, others took videos, and after a few minutes of spectating, they went on with their day, while the dancers danced on. 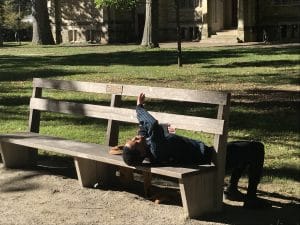