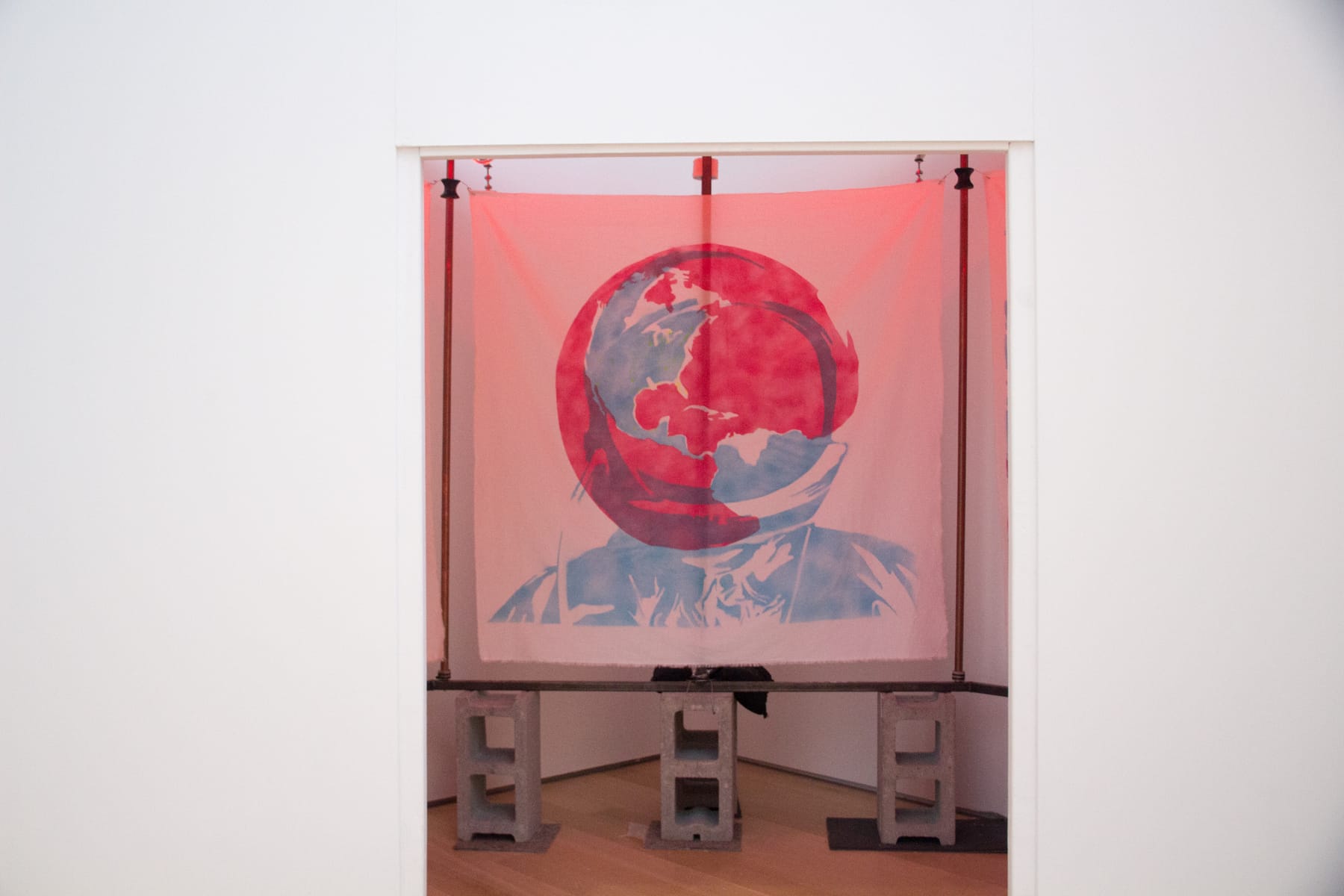 Jenks’ triad of ironically clean and tidy images depicts the desecration wrought by human intervention on three landscapes: sea, land and space. This intersection of graphic design, metalwork, fabric and lighting capture the detrimental effects of the anthropocene, a geological epoch defined by widespread human impacts. Jenks said his process began with this industrial concept and that the medium and style followed this initial impulse. 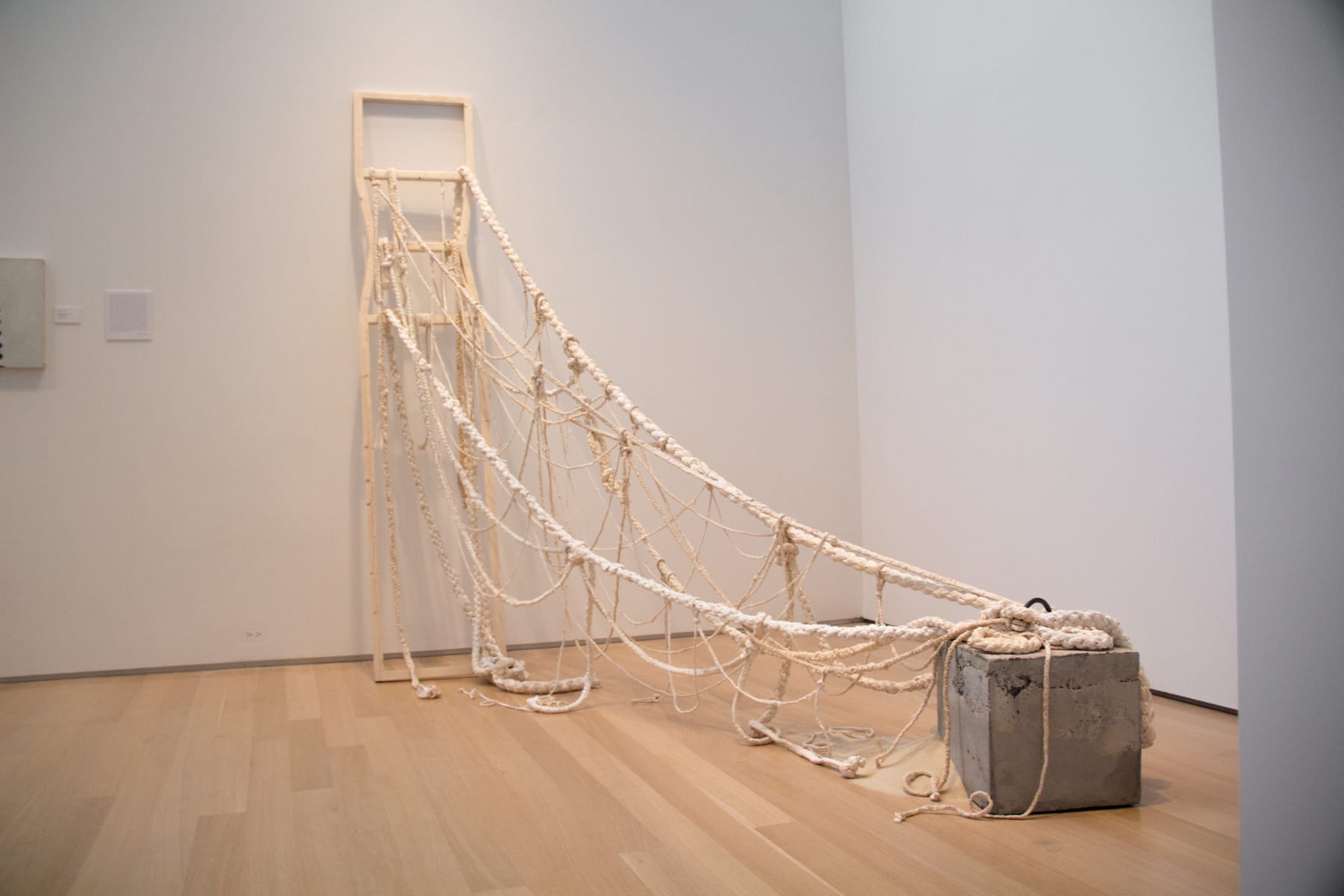 Phoebe Botticelli Pohl: 24, The Weight of an Island

This installment of hanging ropes leaning against the wall of the gallery and anchored by a cement block is meant to recall Pohl’s home, “a small island thirty miles off the coast of Massachusetts,” according to her artist statement. The nautical mess of hanging ropes both recall the atmosphere of home for Pohl and tie her back to the island of her origins, represented here by a cement block. Meant to be both “comforting” and “restrictive,” Pohl writes, the piece evaluates a lingering geographic history and strong sense of place. 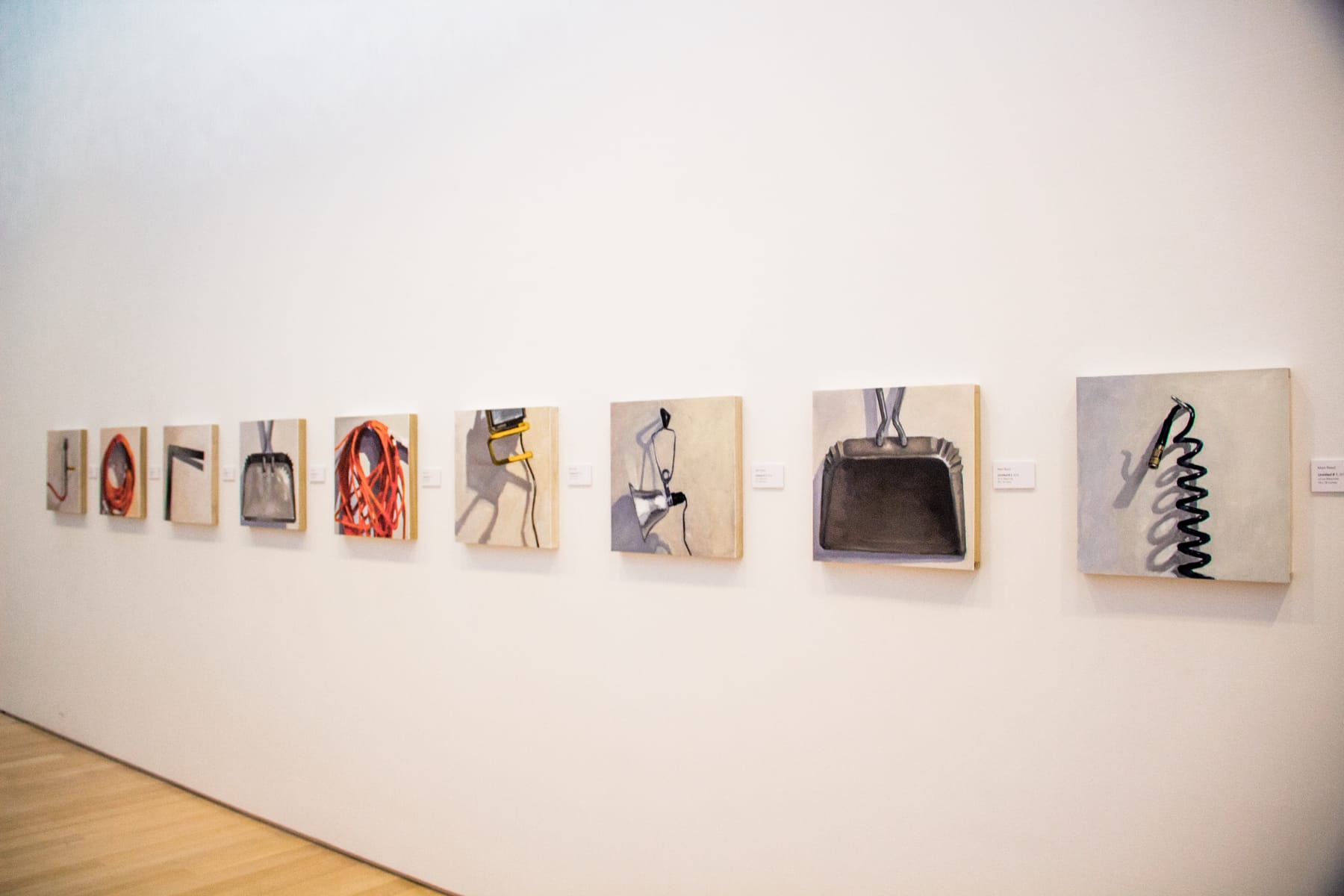 In his series of nine paintings, Reed focuses on commonplace, unremarkable objects from around his art studio. Reed zoomed in on specific features of each of the objects, such as a dustpan and a lamp, stripping them of any context. He placed each object against a white background, stressing the effect that light has on each of them. The result is a celebration of the mundane. Reed’s paintings bring out often-missed details of everyday objects. 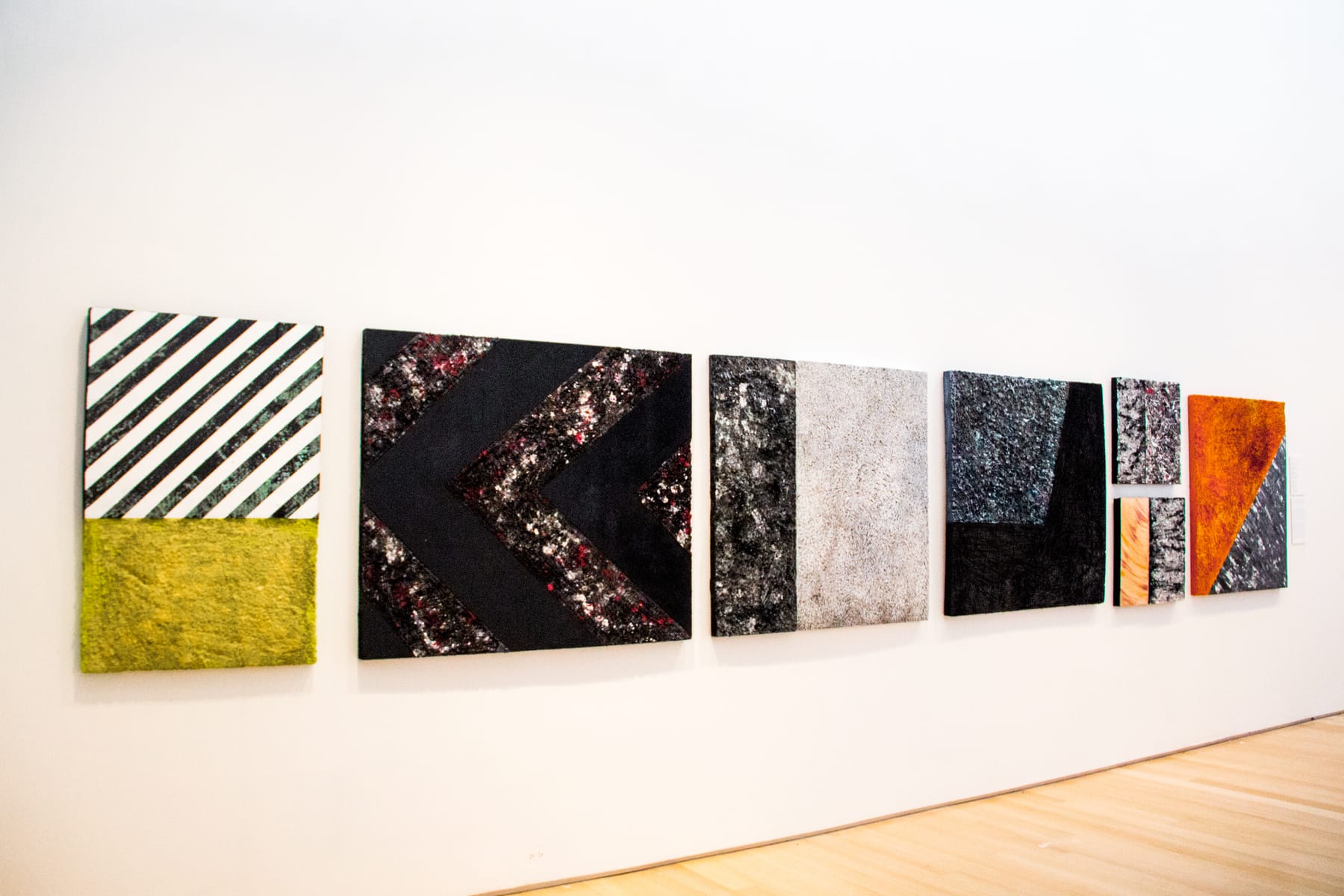 This series is an exploration of the aesthetic use of styrofoam, usually considered only a utilitarian material. “I think styrofoam has a lot of opportunity to work with,” Japp said, who supplemented geometric styrofoam shapes with paint to create an “overwhelming experience for the viewer.” This rumination on the aesthetic insights of insulation gives new purpose and dimension to an uncommon artistic medium. 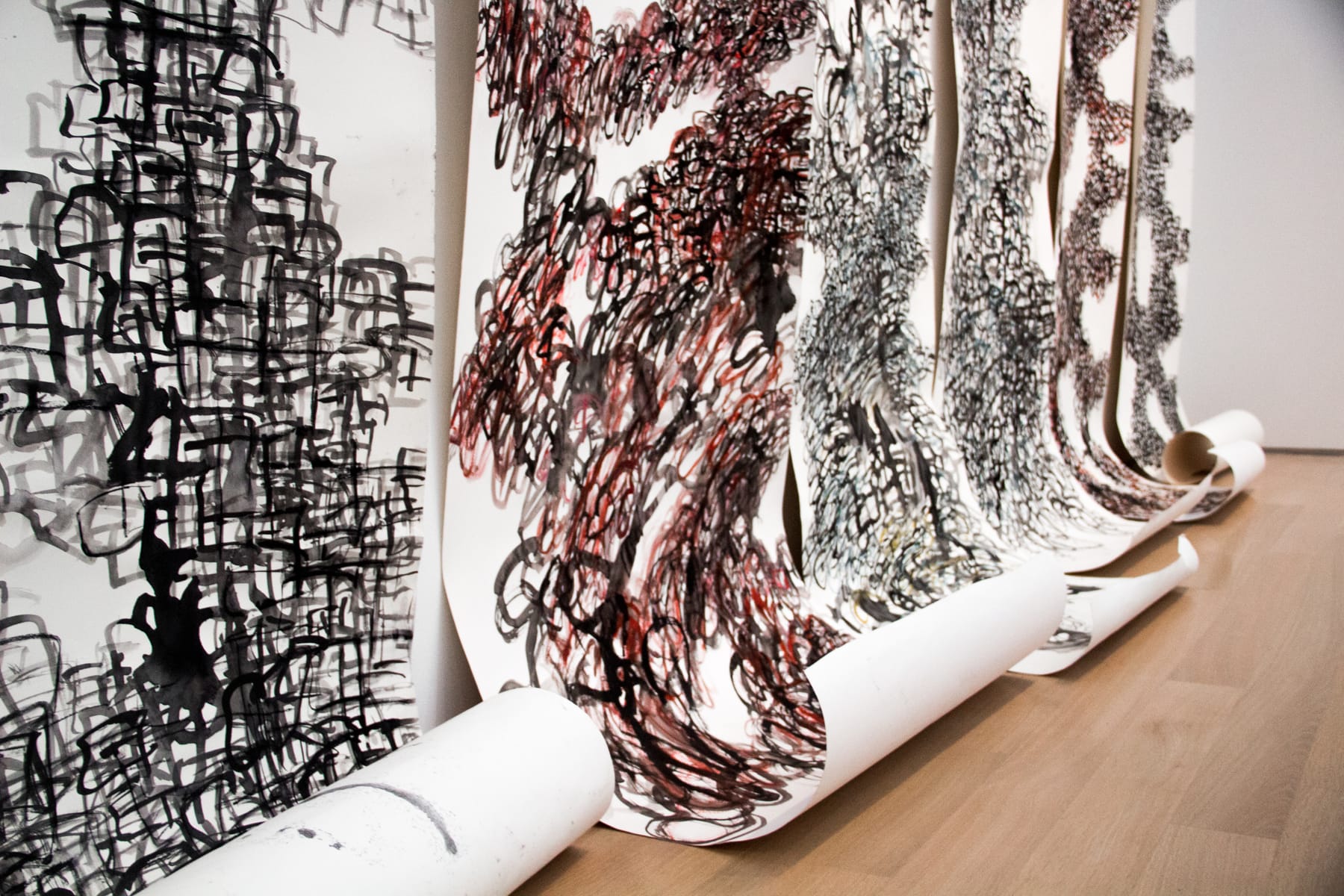 Wong tackles the “visual impact” of the cityscape with wall-length sheets covered in ink and acrylic paint, which she identifies as “drawings with paint” rather than paintings, because of the style of layering “marks.” Each drawing, six of which are on display at the Gallery, represents a city Wong has seen. “I didn’t want them to to be just representations of my travels or something,” Wong said. “I wanted them to be representative of what a city gives you, the visual impact of the city, and the business of the urban congested environment.” 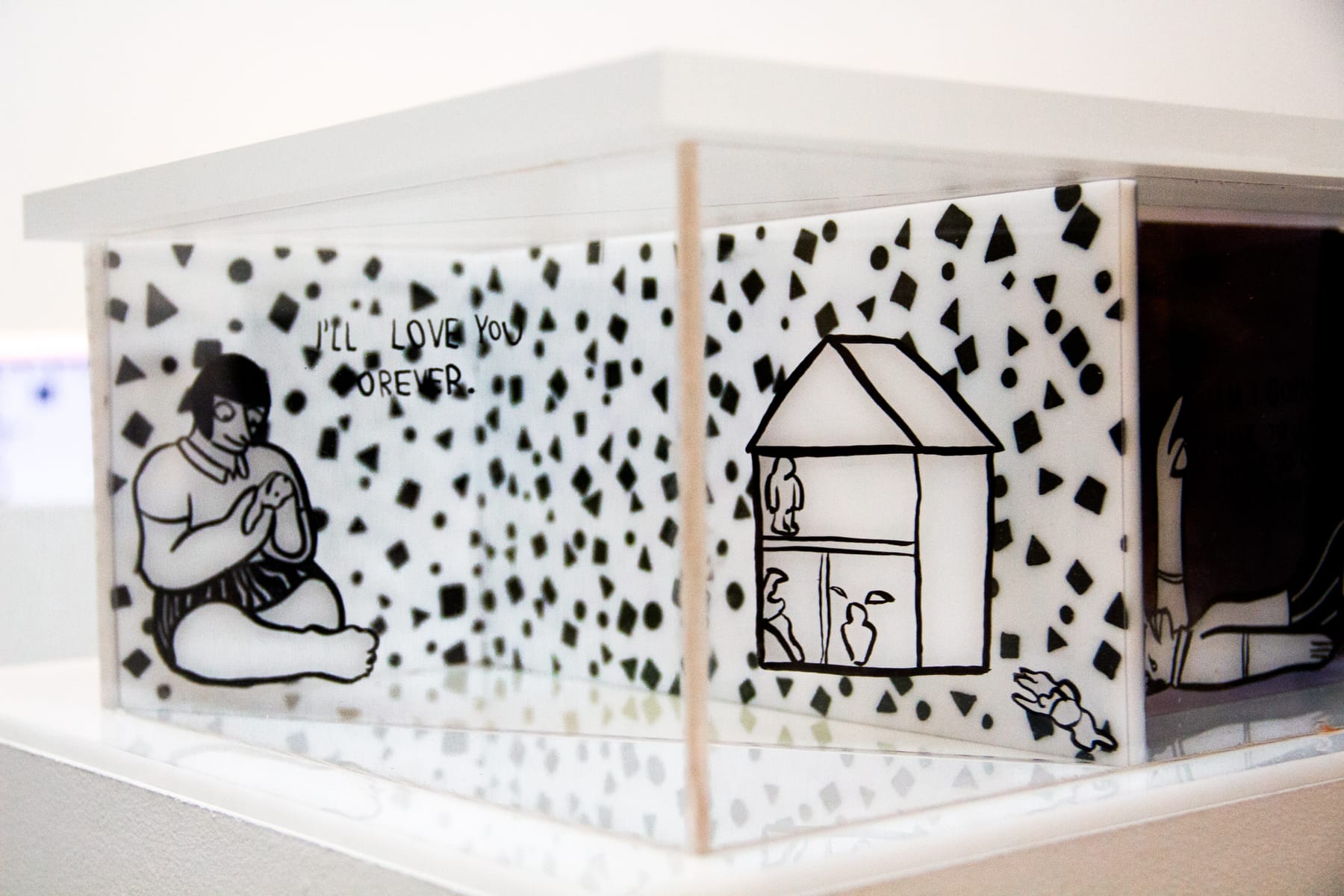 A miniature, comic book-style model of a cul-de-sac, Uhrik’s Only Have Eyes for You deals with common suburban American fears. The series features six homes, with each home representing a comic strip and each room representing a panel. In one, a young woman lies on the floor with her arm in the air. Above her, the text reads, “Am I going to have to learn how to cook now?” Uhrik grew up in a cul-de-sac, but his series is not about revisiting his home. “It’s more so about the communities we live in and the fear and the closeness that we have with one another will soon dissolve,” he said. 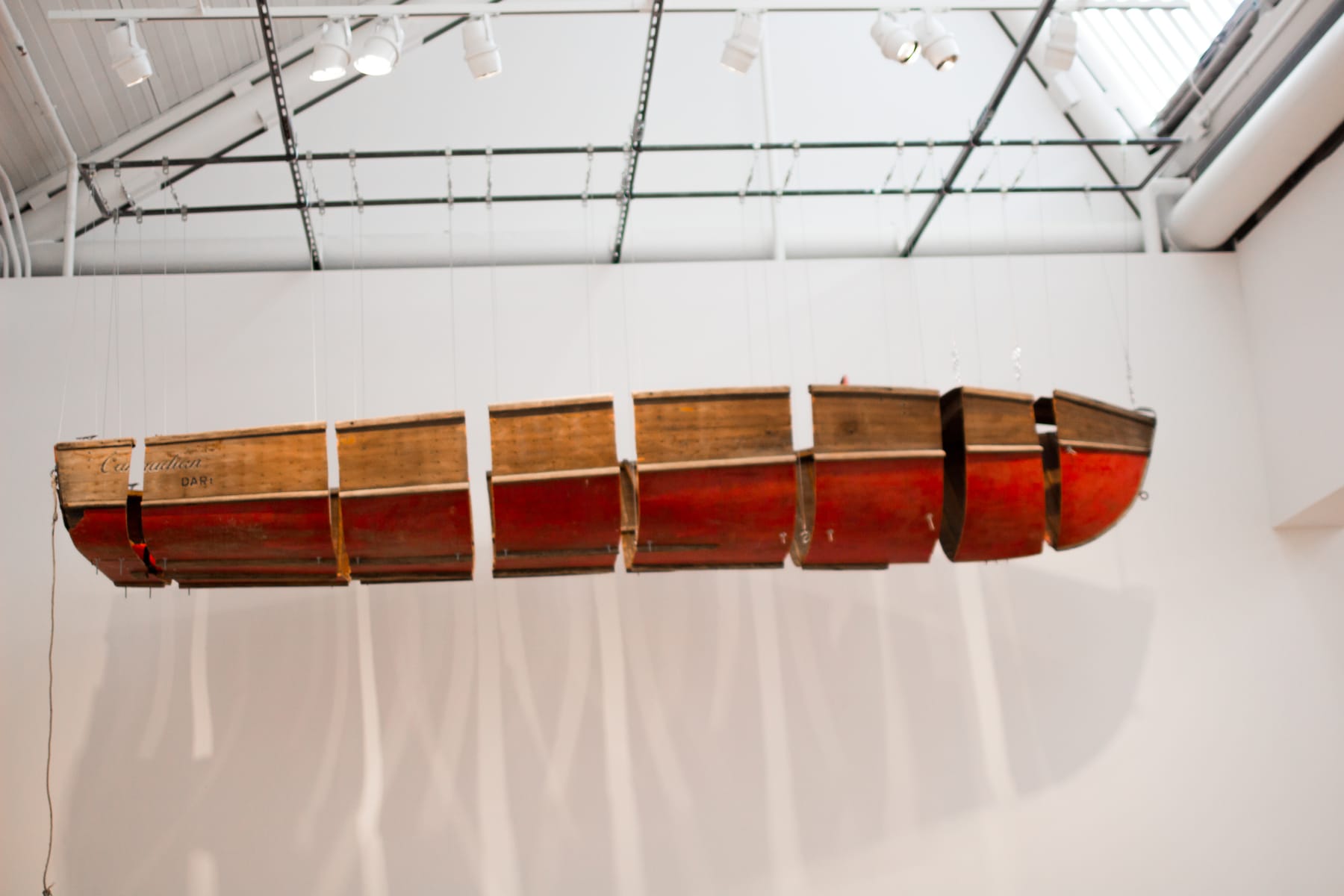 Matthew Garrett: An Object Misses Itself

Garrett’s dissected boat hangs over a monitor displaying the water in which it can no longer float. His engagement with the utility of objects asks questions of purpose assigned to objects by culture. Garrett describes disabling the purpose of an object as “a violent act” in his artist’s statement. “It’s sort of my reaction to the current climate of America as a whole,” Garrett said, noting the history of this object’s use as a method of immigration. Garrett has sent what he calls an “object of collective nostalgia” beyond the realm of its traditional “use.” It now serves as a reflection on its own history. 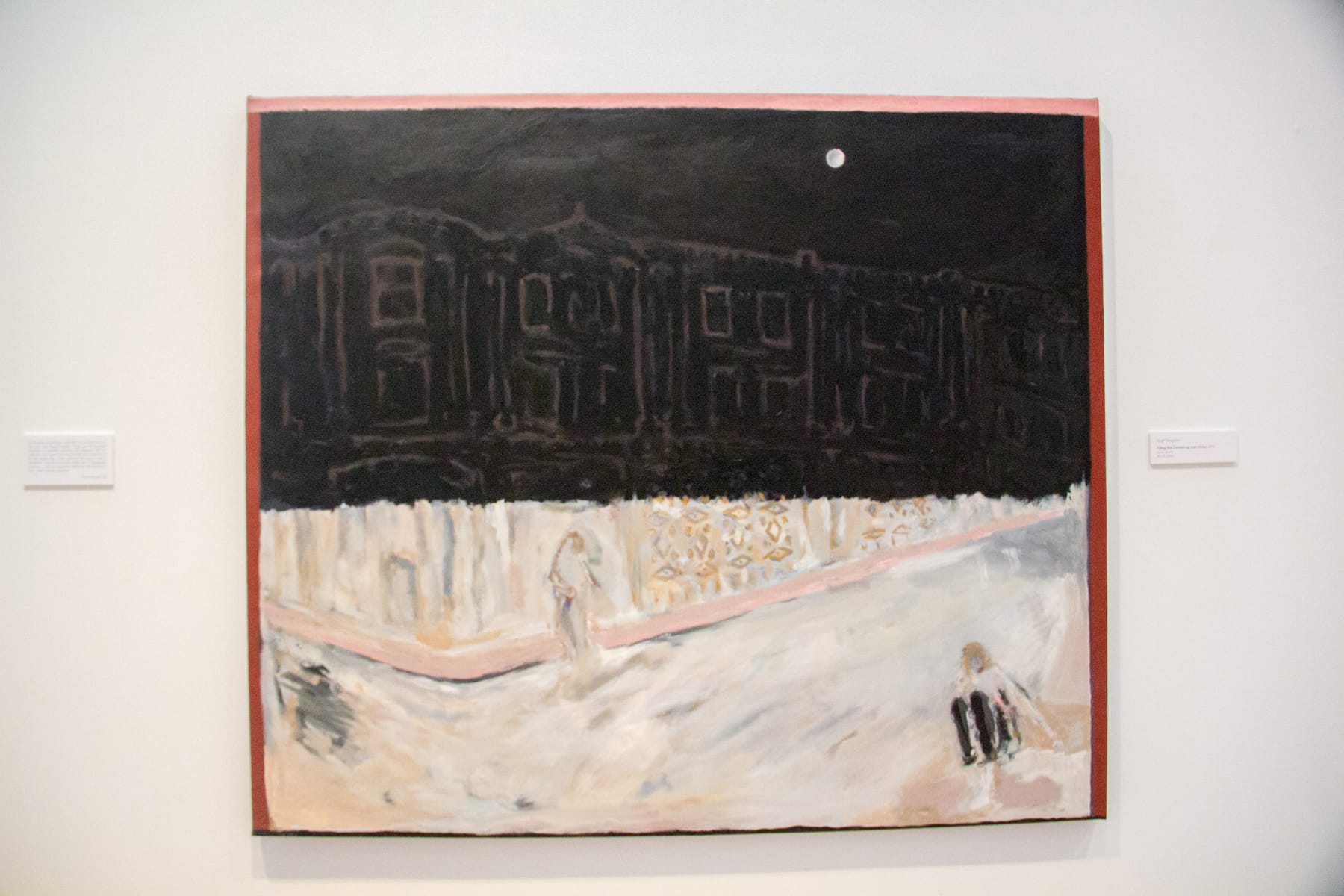 Hugh Ferguson: Untitled series: Filling the Corners Up with Holes, Between Breaths, In the Green Light of Sleepless Morning, Asleep with the Sphinx

In his series of four paintings, Ferguson often obscures the human form, allowing it to blend into other objects or the background. His dark, impressionistic paintings show how people relate to the space around them. They are often surreal and devoid of any narrative. “I would describe it as poetry painting,” Ferguson said. “Painting relations of things that I have found to be poetic, I hope the end result would be something surprising and poetic as well.” 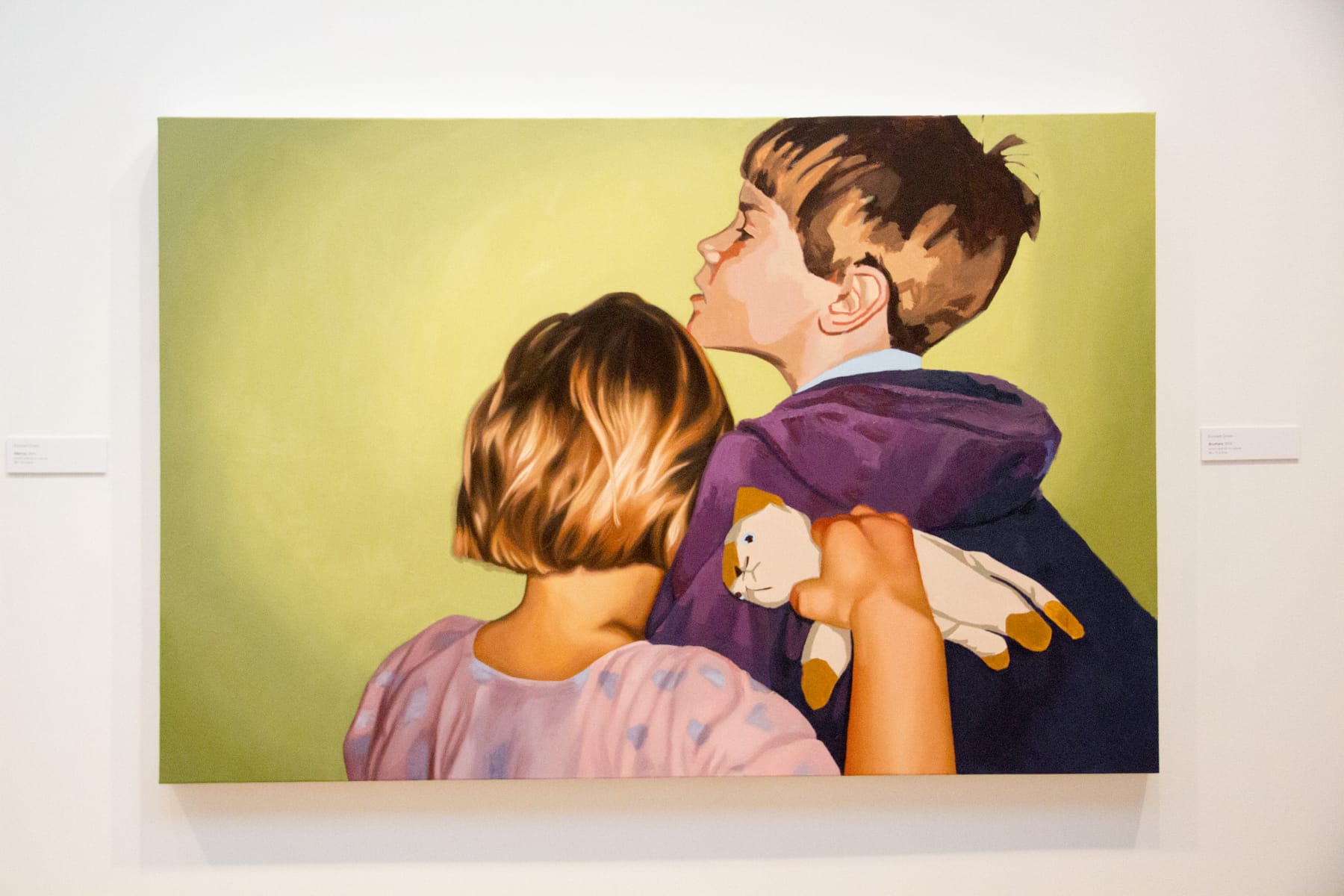 Green tackles family photos in this series of large, vibrant paintings. This series reexamines images from Green’s childhood which are what Green describes in his artist’s statement as “accidental misrepresentations” of a transgender child whose identity was not known to the photographer. This study of the “inability of images to represent reality” shows an artist reclaiming agency over attempted representations of the self by others and bringing new complexity and nuance to an image through a shift in artist and medium. 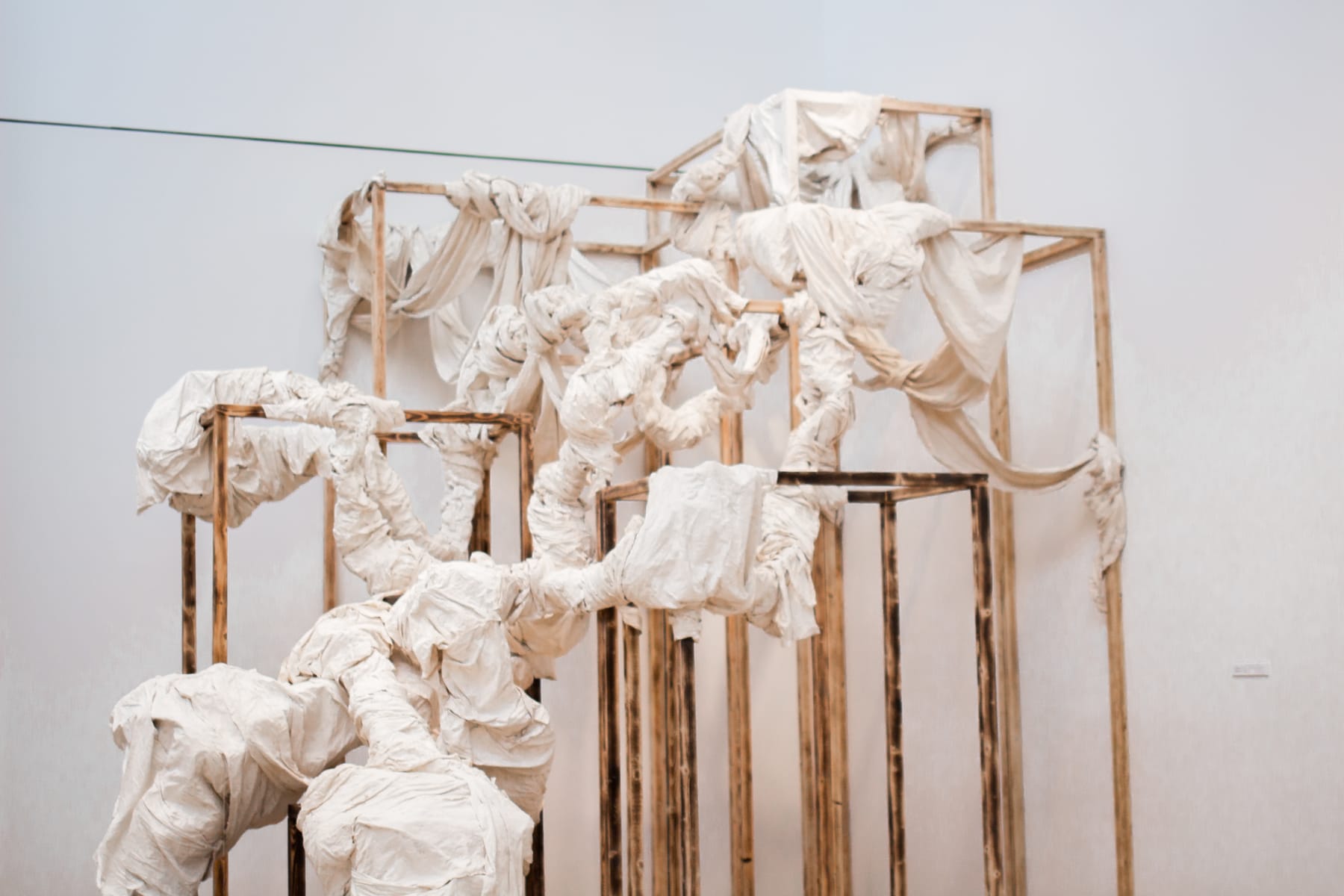 Zoe Chrissos: A Language of Our Own

Chrissos invites visitors to walk through a series of wooden frames, which are also populated by strange, seemingly “undulating forms” made of plaster and fabric. A woodworker and welder for most of her career, Chrissos incorporated plaster because of its “more gestural” nature, in order to produce art related to “growth.” Inspired by Italian artists Mario and Marisa Merz, the wooden frames also follow the Fibonacci Sequence, or golden ratio, which appears in natural processes of growth. These two structures combine to create an interactive exhibit that feels alive, as though it is reaching out to the viewer. 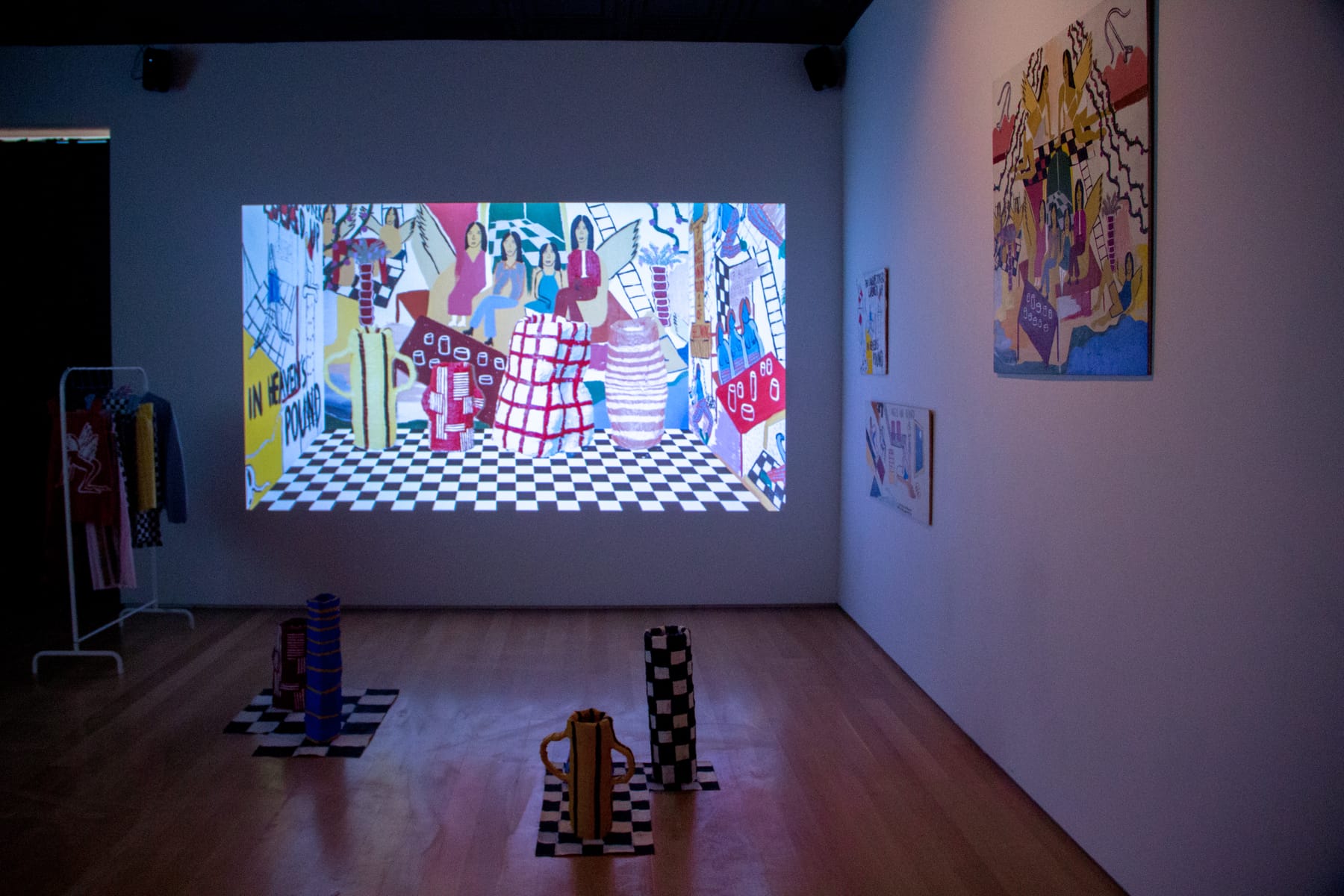 Porter’s video installation “Corey” takes the concept of performing one’s personality for others literally. Corey is a performer in a queer underground cotillion, who dances throughout the video. In her artist statement, Porter writes, “I believe life is comprised of individual performances — rooted in a communal experience and awareness.” The installation makes the viewer consider when they have performed for others. 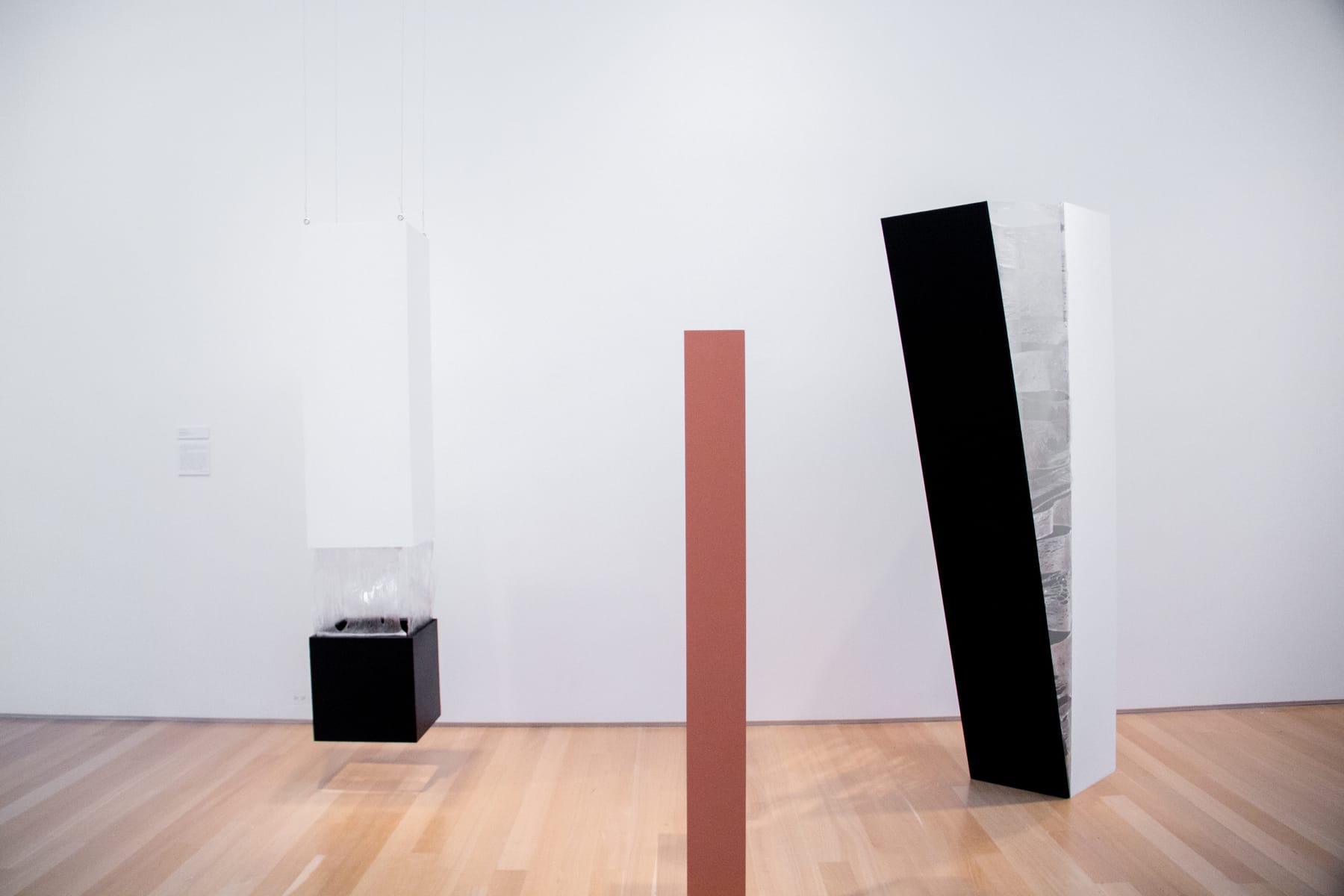 Muthiora’s Hyperdescent challenges the concept of minimalism as being an impersonal, form-focused style. Stark black-and-white panels of plexiglass are arranged in rigid geometric structures, but they appear to be melting, with some panels dragging strands of plexiglass with them as they appear to drop to the floor. The installation reflects Muthiora’s experiences as a person of mixed race: It declares that he is not defined by ratios of “black” or “white,” rather he is a “beautiful brown,” according to his artist’s statement. 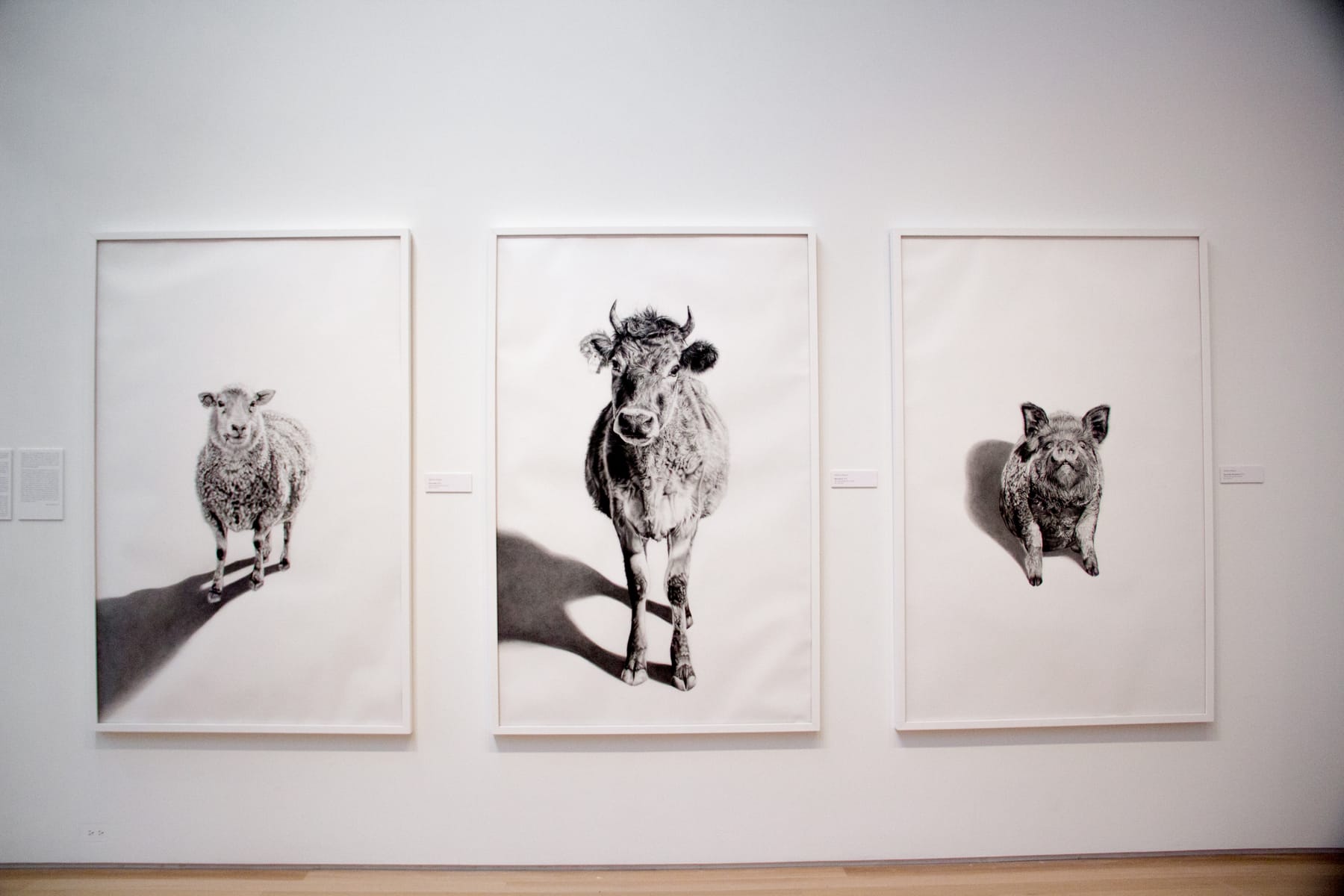 In three hyper-realistic, life-sized charcoal and graphite drawings of livestock, Wagner hopes to elevate perceptions of livestock. These drawings are influenced by her interest in farming, which has grown during her time at Kenyon. According to Wagner, many people see livestock as “un-living, unfeeling objects,” but the animals depicted in her series are alive, and the viewer is confronted by the realism of these images. 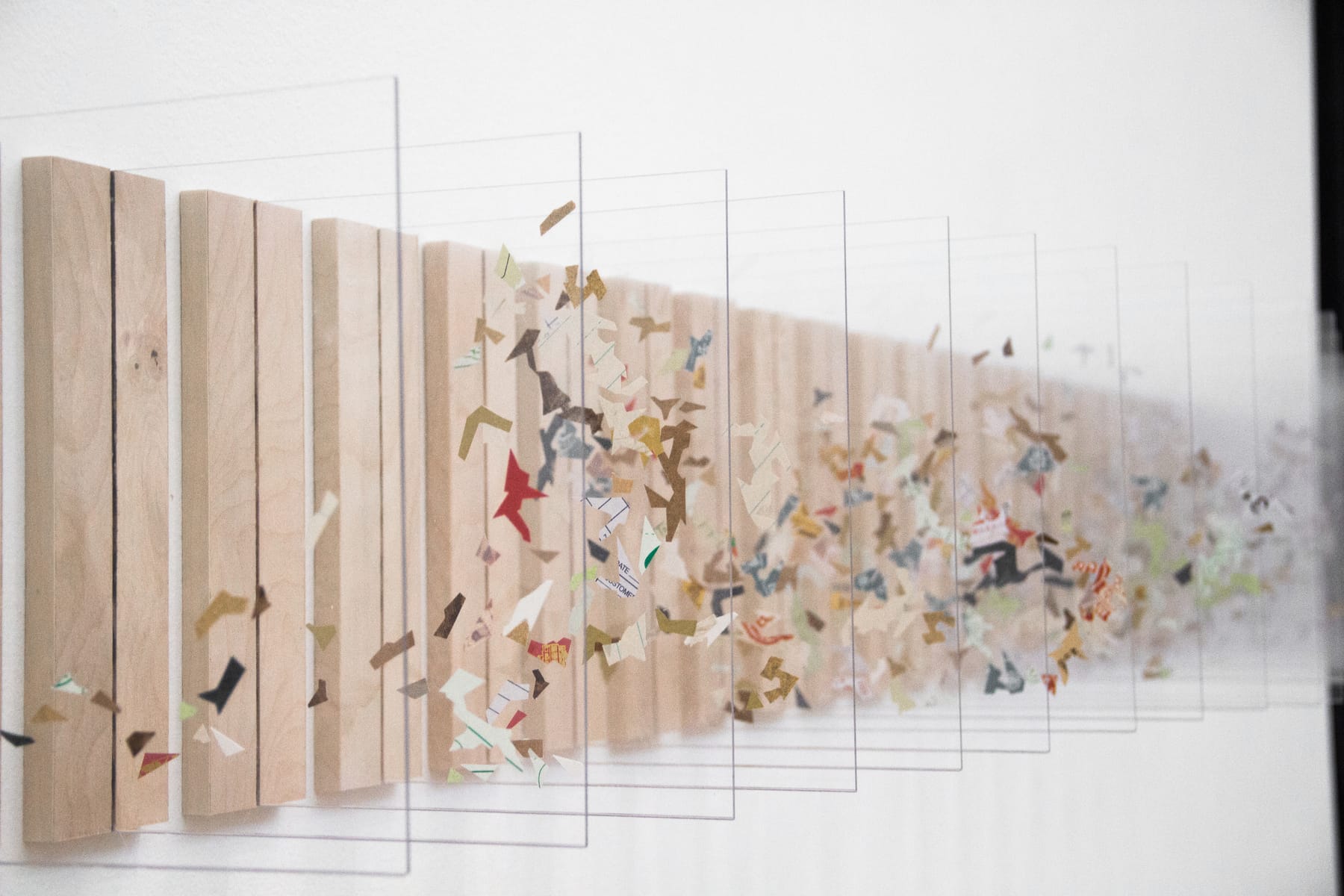 Mourning is a process of struggling to regain normalcy and re-establish control. Chang contrasts the unpredictability of the mourning process with the meticulous, repetitive nature of Chinese paper-cut art. In her untitled series, scraps of brightly colored paper are pressed by sheets of clear plexiglass, dynamically arranged so that their composition evolves as the viewer moves around the installation. The quality of the cheap, non-archival paper, according to Chang’s artist’s statement, contrasts with the hopes and wishes the scraps symbolize in Chinese culture: They literally disintegrate with time. 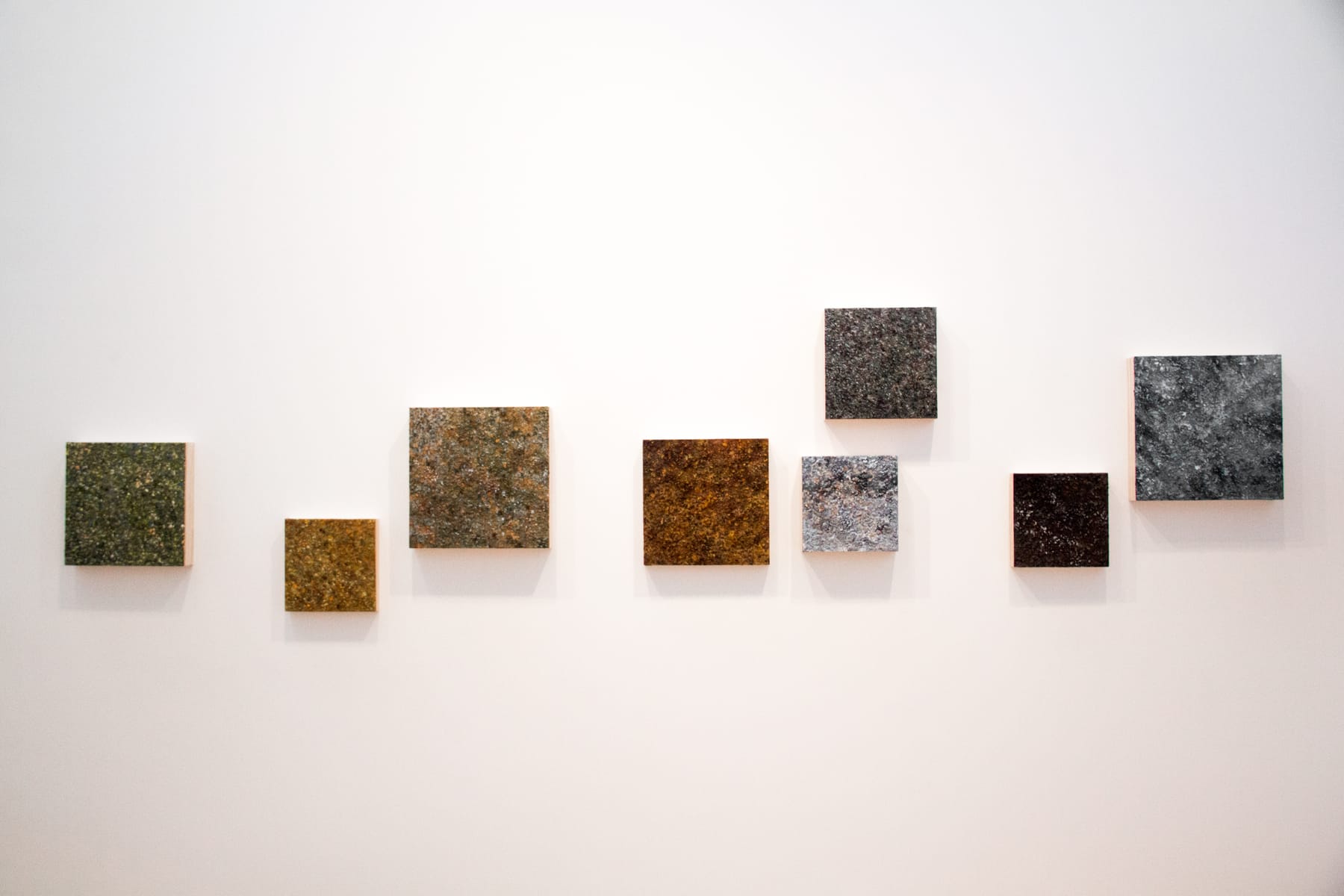 Dani Gorton: No Place Else

Sand, unprocessed pigments and thick smears of beeswax and oil paint form the richly textured landscapes in Gorton’s No Place Else. The series of paintings captures various senses of emotional and geographical “place” Gorton developed over her four years on the Hill. The rough, unfinished edges of the paintings hint at the unnatural fragmentation of the natural world by humankind, and the artificial distinction made between “nature” in developed and undeveloped spaces. 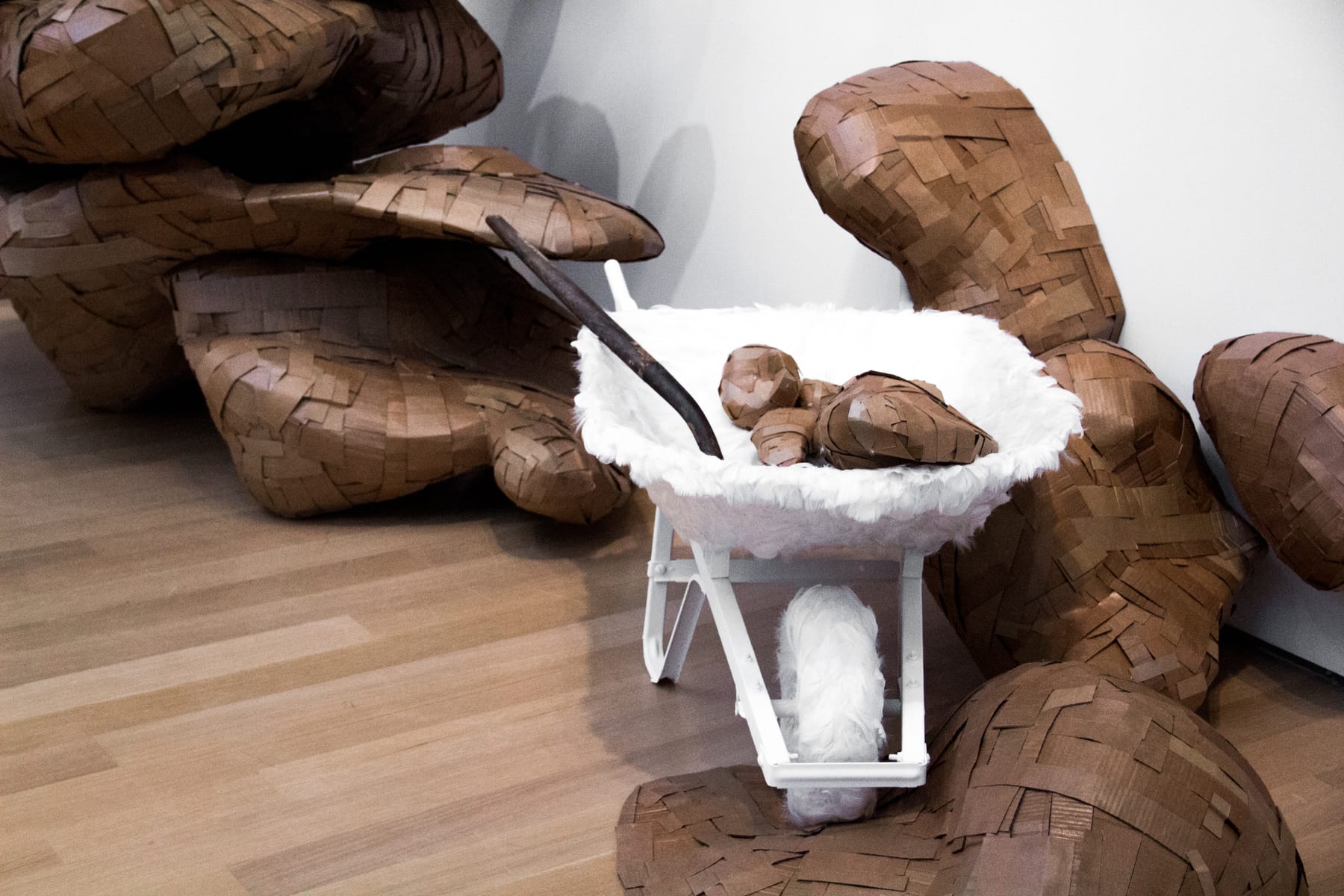 In Bodies of Land, cardboard masses resembling chunks of earth and accompanying wheelbarrow reference Hart’s “personal reconciliation with the issue of conflicting claims on land” in the wake of her own father’s being “forced off.” She says in her artist statement she aims to encourage the inclusion of cardboard’s “societal connotations” of “impermanence and fragility.” She also noted the “political significance” of the involved feathers. The weave of the cardboard effect makes these masses resemble both cohesive mounds of dirt from afar, but still modifies the material of their composition up close.

Hart’s work included a performance piece entitled, Affordability. Hart sat on a wooden stool placed directly in front of a six-foot tall chalkboard and a gallon of milk. Every minute, Hart would climb her handmade ladder to change the price written on the chalkboard, symbolizing the rate of hyperinflation in Zimbabwe, her home, during the 2008 financial crisis. 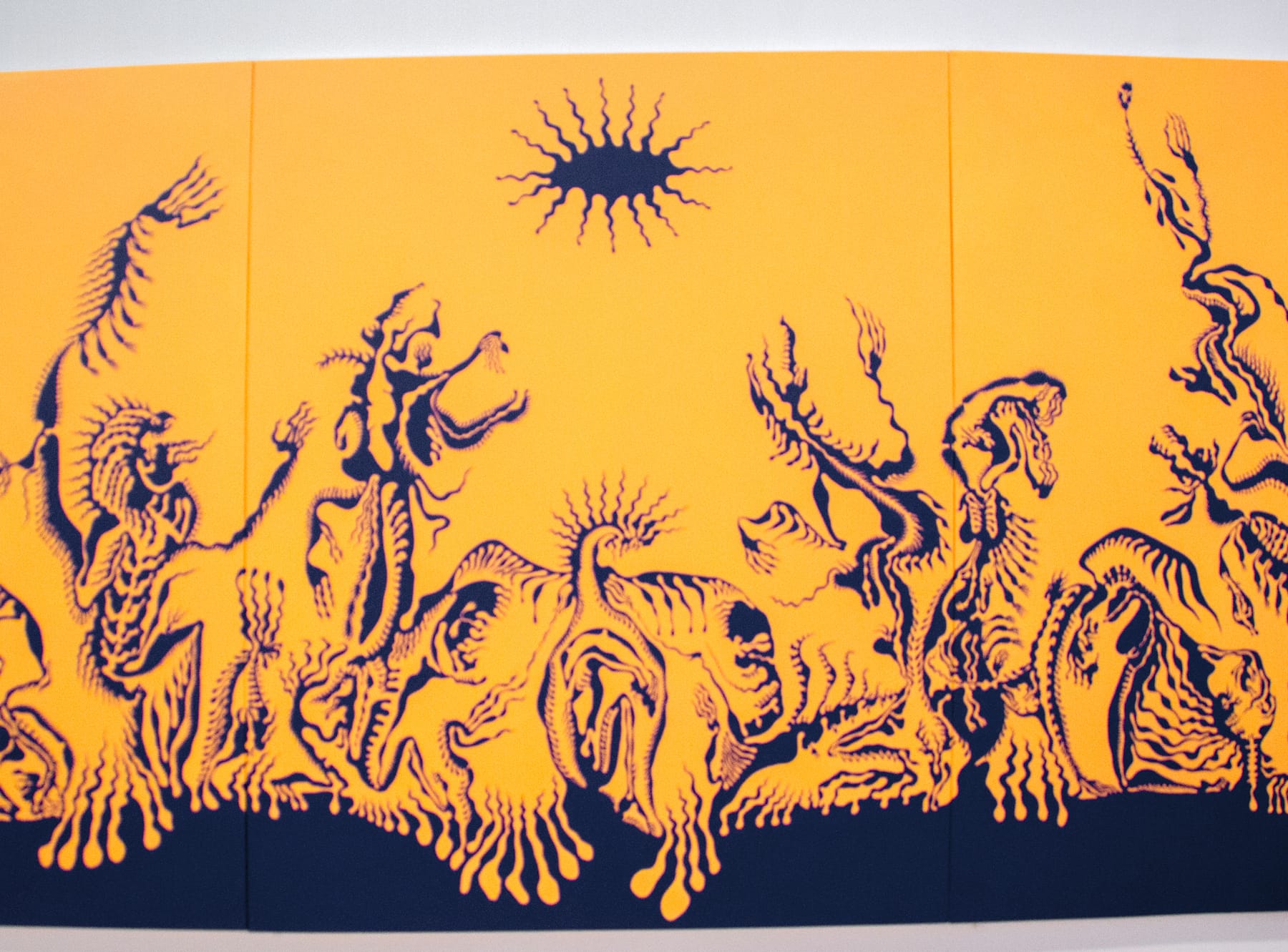 A centerpiece of a sprawling mass of mysterious figures approach an eye-like sun. Kerr has installed a stop-motion video depicting stars. Both works in their respective media engage with audience response. Citing the “Surrealist process of automatism” as a basis for the project’s development, Kerr’s pieces “disrupt the expectation of cognitive mastery and imply a personal accountability for what is perceived,” according to her artist’s statement. 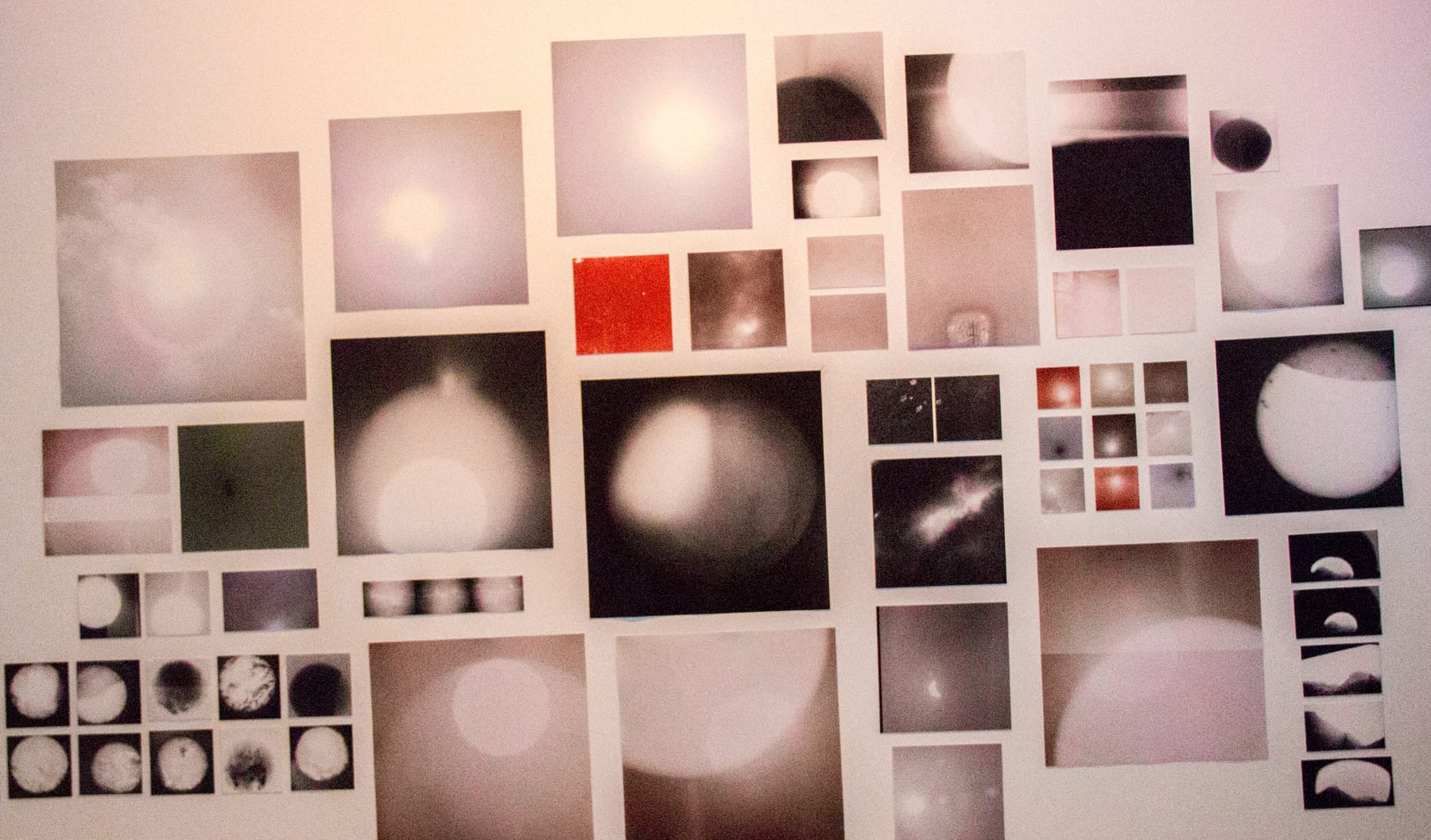 Tuchmann’s photography does not dwell on subject matter, rather it works to make the viewer aware of their own perceptions. Her series of photographs of lights focuses on moments of transition in order to highlight the spaces in between concepts of the known and the unknown, intimacy and clarity and huge and small. Viewers are unsure of what they are seeing, but the distortions of light and space make them acutely aware of the act of perceiving the images. 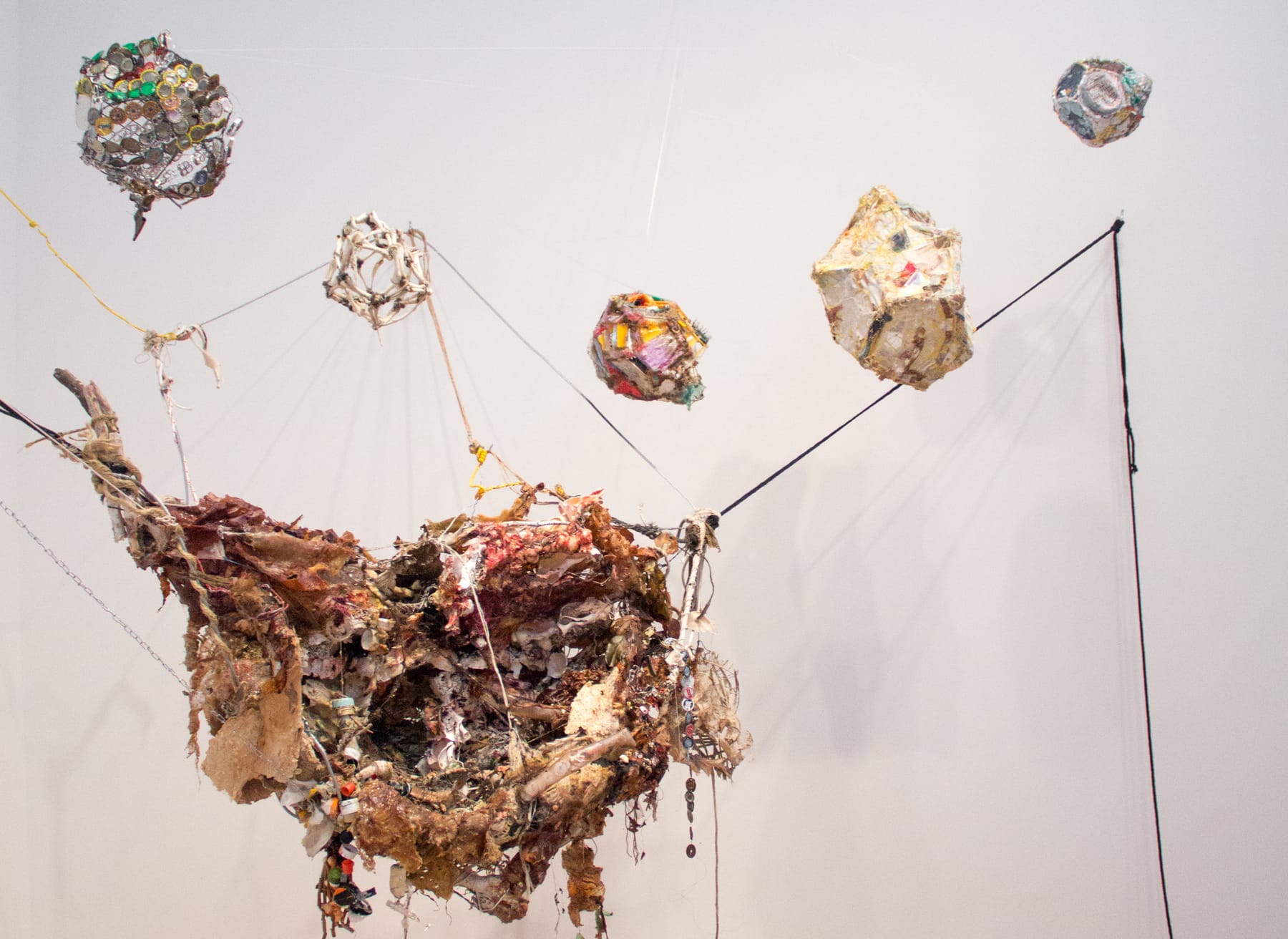 In her artist’s statement, Ellie Stark Manos compares her multimedia and found object collage Anachorocene to a bird’s nest. The collage is comprised mostly of garbage that Manos had accumulated since December of last year. The piece is suspended from the wall, confronting viewers with its shocking, carcass-like form. According to her artist statement, the piece represents our planet’s future: “Our world is on the brink of fundamental and radical change.”